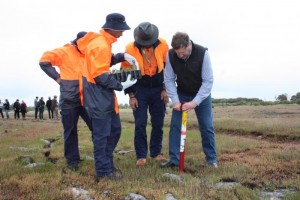 Plantation forestry companies, farmers and conservation groups are among those involved in two projects in Western Australia’s Great Southern region which aim to link and re-connect bushland in critical areas of the Gondwana Link pathway. Source: Timberbiz

The Australian Government has a commitment to plant 20 million trees across Australia by 2020.

Mr Wilson launched the projects by planting a tree during a celebration on the Twin Creeks Community Conservation Reserve, in a flora hotspot between the Porongurup and Stirling Range National Parks.

Greening Australia is implementing landscape-scale linkage projects in the central zone of the Gondwana Link, which are funded as part of the Australian Government‘s commitment to plant 20 million trees across Australia by 2020.

Hugh Wareham, Head of Government Relations with Greening Australia (one of three 20 Million Trees national service providers), thanked the Australian Government and the range of local groups and individuals involved in supporting this exciting initiative.

“The projects will see more than 800ha of landscapes restored with native trees and shrubs, including over 650,000 trees with the potential to grow more than 2m in height,” he said.

Mr Wareham added that past clearing for agriculture fragmented the Gondwana Link landscape, but that scattered islands of bush, rich in flora and fauna remain.

“While there are islands of habitat, they are declining in ecological quality every year and it’s our job to help reverse that decline,” Mr Wareham said.

“Greening Australia is a major stakeholder with a responsibility and commitment to continue restoring land as we have done for the past 13 years.

“Together with our committed supporters and partners we are helping to restore ecological linkages on which the unique plants and animals of the region depend.”

A range of partners including farmers, plantation forestry companies and conservation groups will be involved in the two projects, which aim to link and re-connect bushland in critical areas of the Gondwana Link pathway.

Keith Bradby, CEO of Gondwana Link, said these projects are an exciting boost for the restoration program across Gondwana Link.

“The most practical thing we can all do to help our wildlife is put some more bush back into the landscape, and there is huge support for that work in this very biologically important part of Australia,” he said.

“Greening Australia is taking a leading role in making sure that farmers, community groups and plantation foresters are able to get on with their restoration projects. We are confident this program will be well oversubscribed and are already working with Greening on securing additional funds.”

The 20 Million Trees projects will largely be implemented using direct seeding techniques that Greening Australia has developed and have been using successfully at scale for a number of years.

On-ground work will be implemented primarily during the 2016 and 2017 growing seasons.