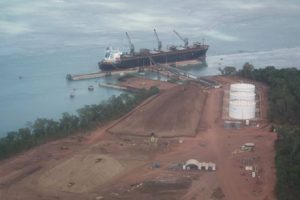 Forestry workers on the Tiwi Islands in the Northern Territory have had their contract work put on hold because of the coronavirus epidemic, which has slowed down demand for woodchips in China. Source: ABC

Plantation Management Partners (PMP), which manage around 30,000 hectares of acacia mangium trees on the Tiwis, has told ABC Rural the decision to delay this year’s harvest will affect around 85 workers.

“We’ve unfortunately been forced to extend the seasonal shut-down of our operations, while demand for woodchips in China has been depressed because of the coronavirus outbreak,” PMP spokesman Robert Hadler said.

“So, 85 staff, including 26 Tiwi Islanders, and 59 staff from the mainland, have had their casual contract work put on hold.”

Mr Hadler said there was no set timeline on when production would resume, although the shutdown could last “for at least a couple of months”.

“We are hopeful it’ll be shorter rather than longer, but no one knows the depths of the issues in China and globally with coronavirus,” he said.

“As soon as it ends, we’ll be in a position to take back the staff and those people who had been working there will be given first right of offer to come back and work.”

Woodchips have been successfully exported from the Tiwis on a regular basis since late 2015, with the project becoming a significant employer in the remote region.

Mr Hadler said China had become the biggest customer for Tiwi woodchips and the company had stockpiles ready for export when shipments resumed.

“When something like this happens, we always look for alternative customers, but we don’t want to burn our long-term loyal customers in China, so they remain our first choice when the market gets back up and running,” he said.

PMP is a wholly owned subsidiary of the ASX-listed Midway Limited, which owns timber businesses across Australia and in recent years has invested $17 million into the Tiwi plantations.

He said the company’s profits had been affected by a number of “external market forces”, including an over-production of pulp in Brazil, the US-China trade war, and now coronavirus.

After enjoying record high woodchip prices in 2019, Midway’s Earnings Before Interest Tax and Depreciation and Amortisation (EBITDA) fell by $8 million over a 6-month period to December 31.

It said the biggest impact on its sales and earnings was the reduced demand in China for high-quality woodchips exported from Geelong in Victoria, which had resulted in “approximately half the normal [number of] vessels shipped” during the first six months of the financial year.

Mr Price said the company was looking forward to a much better second half and there were signs the market was improving, although he acknowledged “several uncertainties” remained that could affect the market recovery, including the impact of the coronavirus outbreak.