The Ark – a major wood project 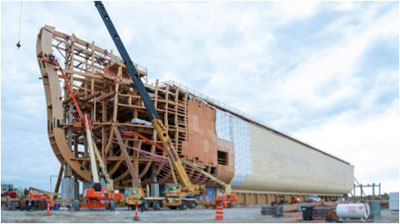 The mammoth Ark Encounter project situated in Williamstown, Kentucky, halfway between Cincinnati and Lexington, on I-75 is being recognized as the world’s largest freestanding timber frame structure, with a total of 3.1 million board feet of timber used in its construction. Source: Batesville Herald Tribune

A football field and a half long, the volume of the biblically-scaled ark is the equivalent of 500 standard semi-truck trailers, and features three levels of exhibits, with a 1600-seat restaurant being prepped on the top deck.

While the structure’s maximum capacity is 10,000 people, organizers plan to limit it to 3000 inside at any one time.

The US$100 million project took just over one year and a half to build with the timber frame construction designed and supplied by Colorado Timberframe.

Just over 1.2 million board feet of square timbers were required for the timber frame itself.

“For our massive project, we needed a special partner,” said Mark Looy of the Ark Encounter.

To meet the construction deadlines, the Colorado company hired additional help, and transitioned to a three-shift work schedule for six days a week for an entire year.

Twenty-five employees worked in the workshop just outside of Denver while 10 more were on site to install the timber frame project in Kentucky, along with 75 Amish craftsmen employed by the main construction contractor.

An extended personal sawmill manufactured by Indiana-based Wood-Mizer was used to resize roughsawn 24-by-24-inch beams of up to 40 feet long to the exact dimensions required for the complex structure.

The LT15 model sawmill used for the project is among the smallest bandmills Wood-Mizer offers – the standard model fitting neatly into the bed of a pickup truck.

“Fifty percent of the timber had to be resized,” Colorado Timberframe owner Keenan Tompkins said.

“So that’s where we really worked the Wood-Mizer for a year. We had one full-time guy resizing timbers for the Ark project.”

One of the ark’s most impressive timber aspects is the 50-foot-tall logs that line the center, many of which are 3 feet in diameter at the base.

A third of these logs are reclaimed Engelmann spruce that had been killed by invasive beetles, and were standing dead.

“We tried to use as much reclaimed timber as possible,” said Tompkins. “We made a deliberate and concentrated effort to incorporate as many as those reclaimed logs as possible.”