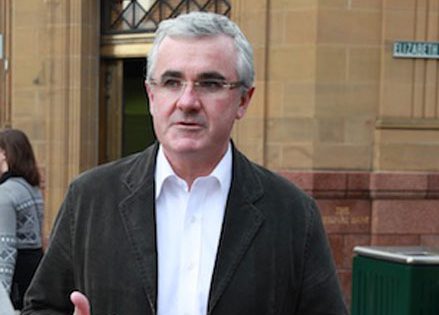 The Tasmanian Government is being accused of rorting a federal subsidy scheme to help solve a lingering forestry issue. Source: ABC News

In 2016 the Federal Government extended the scheme to include products exported internationally from Tasmania, so long as the goods were loaded into containers and trans-shipped through any Australian port.

The program was allocated $200 million over four years — great news for Tasmania’s booming agriculture sector, with its eye on growing markets in Asia. But one company employed the scheme for shipping cheap logs, known as residues, out of Hobart.

Residues out of Tasmania have traditionally been shipped as a bulk commodity after being converted to woodchips and loaded onto carriers, a common sight at the port in Burnie.

Because Majestic Timbers is packing the logs into containers, and the ship heads to Asia via Melbourne, the company gets the money for freight under the federal scheme.

Majestic started exporting from Macquarie Wharf in Hobart in April this year, with the TFES giving $700 per container.

To be clear, the company’s use of the scheme is completely appropriate under the current rules. But there is growing criticism.

One person who fought for the extension of the TFES, and did not wish to be named, said: “to be blunt, it’s a perverse use of the scheme”.

Independent member for Denison, Andrew Wilkie, described the process as a rort, saying what was being heralded as a big part of the Government’s solution to southern forest residues was no solution at all. He said the company was blameless.

“At the end of the day, the company is doing what it’s allowed to do and encouraged to do by the Government,” he said. “The culprit here is the State Government, which I think is rorting a federal subsidy.”

Mr Wilkie alleged the State Government had delivered its promise of ending state subsidies to the industry by replacing it with federal support.

Each year southern sawmills and forests produce 400,000 tonnes of wood waste and logs that cannot be cut into saleable timber.

Historically, they have been exported as chips in bulk shipments to Asia from Burnie, Bell Bay, and, until 2011, from Triabunna.

Since the Triabunna chip export facility closed in 2011 the waste has been freighted north to Bell Bay. Residues are so low value that just the cost of road-rail freight from southern to northern Tasmania for export makes them unviable.

Until the middle of 2017 Sustainable Timber Tasmania — the state forestry business formerly Forestry Tasmania — was providing $5 million to compensate the industry.

The Government promised a solution and in 2015 went to market with an EOI process, looking for businesses that would take it off its hands.

At the time, they stated the process would “solve the southern residues issue”.

Majestic Timbers won a contract to take 180,000 tonnes annually. The contract is for five years. The company’s business model relied on paying relatively little to STT for the logs, packing them into containers and collecting the $700 per container under the federal subsidy.

It was a business plan approved by Tasmania’s Minister for Resources. The first shipment was made in April this year.

Sustainable Timber Tasmania’s Steve Whiteley would not say exactly how much the state-owned business was receiving for the timber.

“I can’t tell you that we’ve obviously got confidentiality provisions,” he said. “There’s a sufficient commercial return, which could be improved if there were a broader range of solutions available to Majestic.”

The ABC believes STT makes $10 a tonne or less on the sale of this wood. Opposition Deputy Leader Scott Bacon said the deal was “not sustainable”.

The ABC also understands that financial support is still being offered to sawmillers to help deal with their waste.

A number of people who spoke to the ABC were concerned about the TFES being used for the export of low-value bulk commodities. One suggested that it might even act as a disincentive for finding better uses of residues in Tasmania.

The state and federal governments have both defended Majestic’s operation.

In a statement to the ABC, Federal Infrastructure Minister Darren Chester said it was entirely appropriate for the company to have its claims paid.

There are green shoots appearing in the Tasmanian forest industry, largely driven by the private plantation sector.

There is also a stability to the forestry sector that has been unknown for decades, largely a result of the lack of protests in forests and in the international markets where Tasmanian timber is sold.

But the challenge for the Government and for the industry is to find uses for hundreds of thousands of tonnes of lower value timber that involves more than cutting it down and shipping it out cheap. Many would say offloading logs in containers with significant support from the TFES is not the answer.