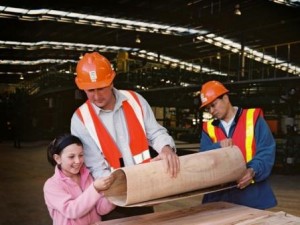 Assisted by a $7.5 million federal government grant from the Tasmanian Jobs and Growth Package, the mill is currently providing 37 new jobs with a target of 120 new positions when the Smithton operation is in full production.

In speaking to those in attendance including government representatives, councillors and other stakeholders, Ta Ann executive chairman Datuk Hamed Sepawi thanked all involved for their ongoing support to make the operation a reality.

“We’ve faced some very difficult years of trading … which made it very challenging to form the vision that first excited us about the prospect of investing in Tasmania,” he said.

“However, the community support from all of you that we have received over the past three years has been a very strong reminder that finding a way through difficult circumstances requires a lot of patience and perseverance.”

The new mill, which was announced as a project in May last year and commissioned for operation two months ago, produces a premium-grade plywood product that will be sold in the Australian market under the brand ‘T-Ply’.

Ta Ann general manager Robert Yong said a quantity of the product had been released into the market, remaining “positive” as the company awaits feedback on the outcomes of its effectiveness.

The company reinforced its commitment to source logs sustainably through its contract with Forestry Tasmania, while targeting future growth for production in private forests and plantations.

It notes that expenditure on the development of the plant to date has been $16.4 million, with $8.5 million of that figure spent in the local region during construction and commissioning.

In addressing the crowd, Federal Member for Braddon Brett Whiteley said it was “a great day” for the community in an example of all levels of government joining together with private business, investing “in a community that has tremendous human and natural resources”.

“At the other end of that building, we take natural resources and we turn it into something special,” he said. “It’s a sustainable industry, a sustainable resource: we’re adding value and we’re turning it into a product that will replace the current imports of the same product.”

The plywood operation now complements veneer systems in Huon and Smithton, with a company statement saying the new operation will inject $40 million a year into the local economy when at full production.