Softwood chip prices up 21% in February 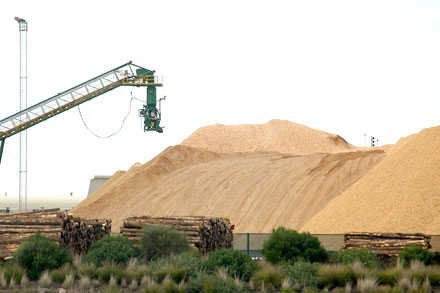 Latest data analysed for the Australian industry by market and trade consulting experts IndustryEdge shows average hardwood export prices were $178.23/bdmt, delivered on board the vessel in Australia (Free on board), while the price of softwood chips was $174.75/bdmt.

Commenting on the prices, Tim Woods, managing director of IndustryEdge told Daily Timber News: “Softwood chip prices were up almost 21% in February. That is a direct result of recent price negotiations in Japan.”

Mr Woods said, however, that recent price rises for plantation hardwood chips will not always be reflected in export prices.

“The driver for higher woodchip export prices is persistently strong demand for fibre, across the globe, but especially in Asia.” Mr Woods said.

“We really don’t see that backing off in 2018, and frankly, it is hard to see demand reducing even after that.”

“Exports over the last year were 9.4% higher than for the prior year.” Mr Woods said. “From our perspective, it is little wonder the entire supply chain has been feeling the pinch over the last two to three years.”

Looking forward, IndustryEdge says its shipping analysis shows exports for March will be above 600,000 bdmt, with 24 vessels departing Australia’s ports in the month.

“Five vessels departed the always busy Portland and four each left Geelong and Bunbury in March.” Mr Wood said. “As ever, shipments were split between China and Japan, the data for which is included in our monthly woodchip export data series. Just one vessel headed to Taiwan.”

“For example, our clients already know what was exported from Australia in March and most of what will be delivered in April.” Mr Woods told Daily Timber News. “The fact the data shows ship names, sizes and both the ports of departure and ports of delivery back to 2013 is a powerful predictive dataset.”

The data is analysed in IndustryEdge’s monthly publication, Wood Market Edge, which is available for subscription, and is also provided on a complimentary basis to subscribers to the monthly Woodchip Export data series.