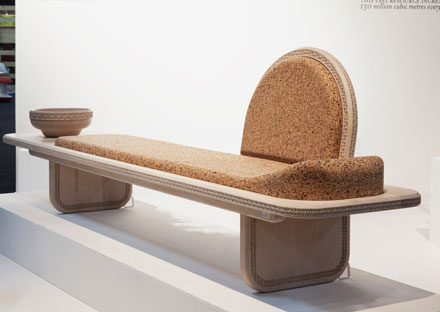 Given an open brief and asked to design ‘something to sit on’, the designers have created seven unique pieces using American tulipwood, red oak, soft maple and cherry, which are less well-known American hardwood species in South Africa. The project in South Africa is the third edition of ‘Seed to Seat’, which was initially launched in Australia last year and in Dubai earlier this year.

The seven seats, which have been designed and made by some of the most prominent and exciting designers based in South Africa, were on show in a creative display that highlighted the sustainable credentials of the American hardwood resource.

“Seed to Seat was conceived as a way for AHEC to collaborate with high profile designers and to introduce them to US hardwood species that are less well-known in their markets. Not only has 100% Design South Africa offered us the right platform to exhibit the finished pieces, this project more importantly marks the first time Life Cycle Assessment on wooden furniture has been carried out in South Africa,” said Roderick Wiles, AHEC Director for Africa, Middle East, South Asia and Oceania.

“Collaborative projects such as Seed to Seat have proven to be a highly effective way of stimulating interest in American hardwoods from designers. At the same time, they help to serve as a means of demonstrating the beauty of widely-available, yet under-utilized American hardwood species.”

With Seed to Seat, AHEC aims to identify the true environmental impact of design and build on its extensive work with Life Cycle Assessment (LCA).

Incorporating AHEC’s LCA research for 19 American hardwood species and all data concerning materials, energy usage, transport and wastage, which was recorded during the manufacturing process, AHEC is able to assess the full environmental impact for each finished piece.

For each design, AHEC has also calculated how many seconds it would take for the wood used to make the piece to be replaced through natural regeneration in the US hardwood forest. Factoring in the size of the forest, annual harvest rates, natural mortality and regeneration rates, AHEC has calculated that it would take less than 2 seconds for all the wood used to grow back in the forest.

“Hardwood trees are selectively harvested and replaced with new growth through natural regeneration. Regeneration far outstrips harvest and, as a result, this vast resource increases by 130 million cubic metres every year.

“For illustrative purposes, this is equivalent to around 4.5 million 40 foot containers in volume. Our initial analysis of the entire project revealed that a total of 0.67 cubic metres of solid hardwood lumber was used to make the pieces.

“Significantly, due to the carbon storage properties of wood, for the duration of their lifetimes, all of the seats will keep a total of 676.70kg of CO2 equivalent out of the atmosphere. Overall, this project has brought together good design, environmental awareness and ‘new’ American hardwoods.”

The Blue Chair by Dokter and Misses

To celebrate their 10-year design anniversary, multi-disciplinary product design company, Dokter and Misses, present The Blue Chair, a sustainable and carbon-conscious reimaging of their very first chair designed in 2007. As part of their involvement with the Seed to Seat initiative, Dokter and Misses decided to revisit their iconic steel work in tulipwood. Thanks to the wood’s light, yet strong properties, they were able to keep the essence of the chair’s original extreme geomantic profile, yet evolve the design into a softer, more ergonomic piece.

The Meraki Daybed, made using cork and American soft maple, is the result of a decision to create African furniture in combination with more modern geometric shapes. The shape and concept for the headrest derived from research based on the Senufo people of West Africa. The carving is a focal point which emphasizes the importance of the handmade aesthetic, as opposed to only machine manufacturing. Cork is also used as an alternative to upholstery, where the emphasis is based on sustainability in combination with an unconventional material.

The Flow Stool is conceived as an intersection of two forms. From below, the angular supporting structure, akin to columns holding up a bridge, with their straight lines and flat surfaces blending into the structure. From above, the human form, softly curved to create an inviting seat. It is at the intersection of these two that the Flow Stool makes its sculptural statement, where it expresses the juxtaposition of human softness and structural rigidity in an undulating flowing edge.

A challenging chair to design and make, the Eve chair combines Andrew Dominic’s paired down cabriole leg with an ergonomic backrest, achieving an aesthetic balance between antique and contemporary. Dominic has kept the joining elements as seamless as possible and rounded the outer reaches, which help soften the shapely lines. With curves being ‘thirsty’ on timber, it helps that the timber is sourced from sustainably-managed American hardwood forests. The Eve chair on show is elegant in ebonized Cherry, with a fine geometric weave spanning the seat. The Eve chairs will be made to order in American ash, cherry, oak or walnut, with the option of an upholstered version available.

DEM has been developed as an event seating solution. Designed with clean and simple lines but still emphasizing comfort and durability, this cost-effective stacking chair is a sustainable alternative to widely used plastic or aluminium products. Significantly, the tulipwood provides the required strength at minimum weight.

The Hardwood chair has been designed to use minimal timber and have striking yet classic lines. Designed by James Mudge, it derives its inspiration from Scandinavian origins while adding his own identity to the piece. The hardwood chair has been designed for small batch production, the design focuses on economy of material as well as a clean contemporary aesthetic. As is the case with all his other work, the design focuses on sustainability both through economy of materials as well as through excellent craftsmanship. Mudge uses all the traditional jointing techniques, such as mortise and tenon and dovetail joints; when cut accurately these joints are much stronger than screws and modern knock-down fittings and if treated with care, products should last for generations.

Playbench 2 is where playful, spatial and interactive meets. Owing to special production techniques, which allowed David Krynauw to be open-minded in terms of the scale and design of his work, the piece has been taken from a hand sketch and transformed into a living object that moves. The product is inspired by geometry and three circles coming together.