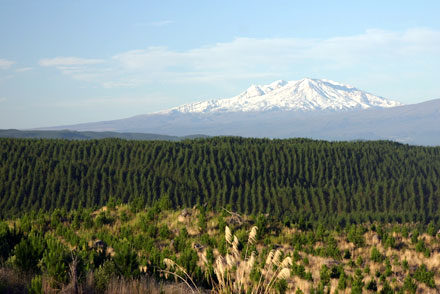 The outlook for forestry is looking significantly better than a year ago, when high log inventories in the key China market were raising concerns. New Zealand Herald

China exports have picked up again and forestry volumes are growing, with some early harvesting taking place to take advantage of strong domestic and export demand, say industry observers.

“At the moment, our members wouldn’t want to be in there saying all is rosy and we’re quite confident,” said New Zealand Forest Owners Association chief executive David Rhodes.

“But there’s nothing on the horizon that suggests it’s not a good healthy market we can expect to be maintained.”

In 2016, strong domestic demand for residential construction and log exports contributed to harvest volumes reaching the highest levels since 2014, according to the latest Ministry of Primary Industries Situation and Outlook for Primary Industries report.

In the coming five years and beyond, forest product exports are expected to continue to be driven by increasing harvest volumes, with the ministry’s Wood Availability Forecast scenarios suggesting the harvest could range between 29 million cubic m and 42 million cu m annually during the next five years.

These scenarios imply, depending on domestic consumption, a harvest rising to slightly over 31 million cu m by 2021, says MPI.

The industry is expecting a smoothing out of production over the next two to three years.

This will be the result of forest owners adjusting to a slight drop in production by harvesting trees a little earlier than usual to meet market demand.

The dip will be followed by a major surge in production from 2020-2025, according to the ministry forecasts.

“What we are seeing is a significant smoothing out of production and we’re projecting a much more even flow of timber coming through,” said Mr Rhodes. “One of the characteristics of forestry, which is quite different from other primary production crops, is that you have the ability to bring forward or postpone the harvest. We’ve seen quite a bit of stuff going out at a lower age than would normally be the case.”

Forest Owners Association technical manager Glen Mackie said the ministry and the forest owners agreed that the expected small dip would see the harvest brought forward, in anticipation of the expected major lift in production beginning around 2020.

“To bring the harvest forward two or three years is not a big deal and it smoothes out production,” he said. “Things are definitely improving and the markets are reasonably robust – it’s looking very positive at the moment.”

“The domestic market continues to be buoyed by a strong New Zealand property market and construction activity; the export market again is a strong-demand-from-China story,” he said.

“This situation is expected to continue into the foreseeable future although further price increases, if any, are expected to be moderate over the next few months.”

Favourable log prices and the increasing availability of maturing forests planted in the 1990s was resulting in increased sales volumes in all markets, said Mr Weblin.

Supply and demand were well balanced in China and Korea at the moment, while India was a little heavy on inventory and supply.

However, increases of 10%, 15% and 29% between the same periods for Russian, Pacific North West and Australian log supply, respectively, suggested that NZ Radiata pine had lost some market share to these competing sources of softwood logs, he said.