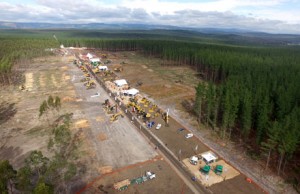 The organisers of AUSTimber 2020 have rescheduled this year’s event over CoVid-19 concerns and will now work on delivering the event in November 2021. Source: Timberbiz

It was planned for April this year, and then was postponed until November because of the bushfires in the Gippsland region of Victoria where the exhibition was to be held.

“Given the uncertainty around ongoing restrictions both now and over the next 12 months or more, including travel within Australia and internationally we have made the difficult decision to reschedule AUSTimber2020 until 2021,” Australian Forest Contractors Association’s general manager Stacey Gardiner said.

“We want to ensure the show has every opportunity to be a great success and that means giving our supporters, exhibitors and partners the space now to focus on managing their way through these unprecedented events and time to recover,” she said.

Deciding upon which dates to host AUSTimber2020/21 had required careful consideration of the impact on commitments already in place for the show.

“We consulted with all of our supporters, exhibitors and partners to identify a suitable date that has support,” Ms Gardiner said.

“It was clear from this feedback that later in 2021 was preferred.”

AUSTimber is owned by AFCA, which is a non-profit, member organisation run by a volunteer board of directors, and they remain committed to delivering the show.

“AUSTimber is the largest timber industry show in the southern hemisphere and even though we have already commenced planning to facilitate a seamless transition to the future show in November 2021 we are dealing with the compounding financial impacts of now twice having to reschedule,” AUSTimber coordinator, Ms Dionne Olsen said.

Tickets already purchased will be honoured and the program remains unchanged for the new dates.

“Everyone’s continued commitment means our communities will still have the opportunity to benefit, in November 2021,” Ms Olsen said.