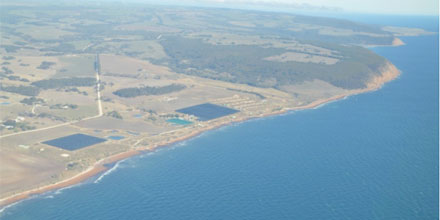 Smith Bay the site of the proposed seaport.

Kangaroo Island Plantation Timbers will remove its tree crop and return its land to traditional agricultural use. Source: Timberbiz

The decision follows Planning Minister Vickie Chapman’s decision on Monday to reject KIPT’s plans to build a $40m seaport on Kangaroo Island to export timber to the mainland.

The Smith Bay plan was proposed to export timber from the island, solving a decades-long question over how to transfer the wood to the mainland and markets overseas.

The port, which the company said would have created a large jobs boost for the region, was declared a project of major environmental, social and economic importance in February 2017.

The company’s managing director Keith Lamb had described the port as a critical part of the puzzle to activate the forestry industry on Kangaroo Island.

Ms Chapman said she had decided the potential “long-term and irreparable damage” the wharf could bring the island was a risk she was “not willing to take”.

Refusing the application, she cited the potential effects on surrounding businesses, the marine environment, and biosecurity risks.

“There were also concerns with the impacts on the road network and how increased truck numbers on the island would affect the character of the popular tourist destination and home for many,” she said.

In a statement to the Stock Exchange this morning KPT said its reversion strategy would require significantly less capital and would revert the company’s 18,696 ha of high-rainfall land to a productive agricultural estate over a shorter period of time.

“KPT will however, continue to pursue any salvage harvest opportunities – particularly for softwood plantations – if they present attractive risk-adjusted returns to shareholders,” the statement said.

The agricultural strategy does not require new port infrastructure on Kangaroo Island and KPT will begin reversion activities immediately.

“Reverting timberland to a more traditional agricultural use is a proven process,” KPT said.

“Since the failure of the MIS experiment, more than 100,000 ha of former forestry plantations have been reverted to agriculture in Australia.

“By undertaking this lower risk and well-trodden strategy, we will in turn develop our land into an institutional grade, conventional agricultural estate.

“The company’s vast, high rainfall landholding is unique and is expected to command a premium valuation in due course.”

SA Forest Products Association chief executive Nathan Paine said the Smith Bay proposal would have provided a long-term export facility that would have given industry confidence that it could harvest and export the current estate and then replant and know that in 28 years, or every thinning rotation, that it would have a facility that was capable of exporting the product.

But he said that the company had to make the best decision in the interest of shareholders.

“We now know more than ever before the critical need of having trees to be able to build houses, and the reality is that we’re going backwards.

“We are going to be engaging with government in continuing the conversation about how we ensure that we can get more trees in the ground,” he said.