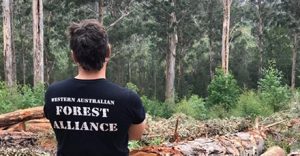 It’s fair to say that everyone agrees there is a lot of work to be done for Australia to come out of the CoVid-19 fog economically as well off as possible. Well, almost everyone. But more on that later. Source: Bruce Mitchell

So, it’s great to see Allied Natural Wood Exports (AWNE) has started loading the first woodchip vessel to dock since the bushfires forced the Eden facility to shut down in early January.

Twofold Bay is back in action and the ANWE’s facilities are back to near full capacity after being extensively damaged in January.

The fact that in just four months the business has demonstrated its commitment to the industry and local community and is back at work when it might have been so easy to walk away is to be heartily congratulated.

ANWE concedes that the support of the Federal and NSW Governments as well as local government and the community had been the keys.

But there remains little movement – Federally at least – on industry and even Opposition calls for a National Housing Stimulus Plan to protect almost one million workers relying on the construction industry.

But calling for the Federal Government to focus specifically on home building is going to be difficult. The question has to be asked; who is going to be putting their hands up wanting to build a house? Australian households generally face a grim financial outlook as coronavirus unemployment rises.

Building a new house is often the first house for many taking that first step towards home ownership.

Sadly, that cohort is probably the one feeling the greatest economic impact at present.

They are not likely to be the ones lining up to build a house.

Therefore, any economic stimulus needed to help the building industry should probably start with those who want the houses built in the first place. Employment, and in particular stability in employment, will be the key for many prospective house builders.

That in turn will help companies like AKD get back to work.

AKD has been the first mill – and probably be the only one – to stop or reduce production in response to the massive downturn in the building industry.

AKD’s CEO Shane Vicary says we are all in this together. It’s a sentiment that is being widely echoed around Australia at the moment.

But perhaps, maybe, that’s not quite true.

The Victorian Government’s refusal to back that State’s native timber industry is well chronicled. This is possibly best demonstrated by its inaction over protestors illegally preventing foresters from going about their business.

As AFPA CEO Ross Hampton points out today in his opinion piece, the inaction is particularly disappointing given the recent recognition by the National Cabinet that forest industries are an essential service because of the vital services and products they provide.

Inaction is of course just as bad as interference, as we saw in Western Australia on Thursday.

The WA Government seemingly bowed to activists involved in protests by agreeing to, according to the state’s peak timber industry body, unjustified demands to halt sustainable timber harvesting operations near Bridgetown.

According to FIFWA Deputy Executive Officer Matt Granger the regrowth forest coupe in question has already been assessed by scientists as not containing old growth and has been on the published Forest Products Commission (FPC) Harvest Plan since 2018.

“So, thanks to (the) interference by the WA Government, there are contracting crews which have been stood down from their scheduled work,” he said. “This action is not justified. It’s a massive breach of process, and feeds future disruptive behaviour by these activists.”

This reads as the State Government having no confidence in its own professional staff and shifting costs and delays onto the timber industry at a time, more than any other time in recent history, that the industry, the State and the country as a whole cannot afford.

And, as in Victoria, Matt Granger suggests it indicates the Government doesn’t care about regional jobs, “especially as we are trying to climb out of the CoVid-19 hole”.

We all should be in this together.

But with some State Governments appear to be doing their level best to shut down vital industries at a time when every job, and every dollar earned, is vital to the nation’s economic rebuilding exercise post-CoVid-19, then maybe it’s fair to assume that isn’t true for everyone.