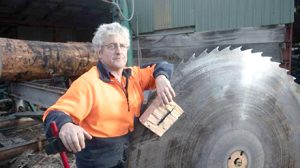 Wayne Booth of Karanja Timbers in southern Tasmania with a piece of timber that had been spiked.

It is surprisingly hard to put into words the bastardry being inflicted on Tasmania’s mill operators. Spikes have been found in several trees at two Tasmanian sawmills leaving political parties at loggerheads over who is responsible for the industrial sabotage. Source: Bruce Mitchell 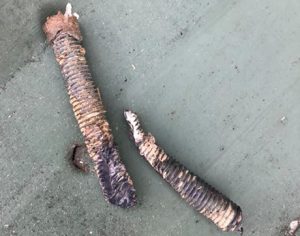 Police are now investigating at the affected sawmills in the Derwent Valley and Bridgewater.

The intention of the practice is to prevent loggers cutting into that section of the tree and leaving the sawmill unable to process the wood.

The Liberal Party and the Labor Party in Tasmania are unified in their condemnation of the act.

Some of the conservation groups – the Bob Brown Foundation and the Greens – have condemned any spiking and have denied having any involvement.

But in a truly frightening turn Tasmanian Greens leader Cassy O’Conner said the tree spiking could have come from within the logging industry.

“We are highly suspicious that this is another attempt to blame and demonise people who are standing against forest destruction,” she said in a statement.

“The last time tree spiking was alleged in 2012, it was found to be the work of a disgruntled industry worker.”

It is one thing for protestors to lie down in front of logging equipment, or to tie themselves to trees. Barring an unfortunate accident, they are

But spiking logs which once in the mill could easily shatter a saw sending metal fragments flying through air is tantamount to, well, attempted murder.

A circular saw would be travelling at something like about 5000 feet per second. When it hits metal, any metal, the fragment created is going to be flying at considerable speed. It would go straight through a human.

It’s akin to lobbing a grenade into a crowded bar.

Sawmiller Wayne Booth, of Karanja Timbers where some of the booby-trapped logs were delivered, said his son Chris could have been killed, had a sabotaged log passed through an unmanned initial saw to a secondary saw, where Chris was working.

“It really makes me sick to the guts, sick to the core – my son was the one working on the next machine and if it hit that, god knows what would have happened,” he said.

So, for Ms O’Conner to claim the spiking could have come from within the logging industry is simply reprehensible and one the Bob Brown Foundation, for example, should publicly and loudly condemning.

Meanwhile, the forthcoming Eden-Monaro by-election looms as a real test for both the Government and the Opposition.

It’s worth repeating that the seat has long been held up as a bellwether seat; from the 1972 election until the 2013 election, Eden-Monaro was won by the party that also won the election.

On the flip side, no government has won a seat from an opposition at a by-election in more than 100 years.

Both the Opposition and the Government therefore have legitimate claims for underdog status.

And as Nikki Savva wrote in The Australian this week it is also fair to say that the Opposition Leader has more to lose if he fails than the Prime Minister does, despite Mr Albanese’s friend’s and occasional enemies dismissing suggestions his leadership would be threatened, ostensibly because they all appreciate how difficult it will be to retain the seat.

“That sounds logical, except politicians don’t always behave rationally after a loss, despite what they say beforehand. Even if they do, blows to morale inevitably feed into disunity,” she wrote.

If Mr Morrison does win, with or without the help of another miracle, he will be untouchable. Few dare question him now, Savva wrote, and even fewer will risk it after.

Eden-Monaro has always been a seat to watch in any election.