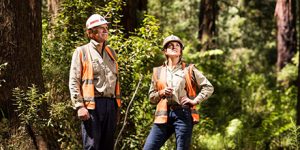 There seems to have been wins all-round this week for foresters, the building industry, and the Australian Forest Products Association. Starting with the AFPA, it had a big win over the ABC with a complaint of unbalanced reporting and biased coverage being upheld. Source: Bruce Mitchell

The ABC has been the target of complaints for some time over its alleged bias against the timber industry in general.

It has also been widely criticised for some time over its lack of balance in stories, despite announcers regularly claiming that “in the interest of balance” they tried to contact someone for a counter argument, but no one was available.

It’s worth pointing out that “in the interest of balance” is actually a requirement under its charter.

The AFPA’s complaint was a classic case in point.

The story in question was a report on the Victorian Regional Forest Agreement.

ABC Radio Melbourne interviewed a member of the Goongera Environment Centre which was highly critical of the recently re-signed Victorian RFA and those involved in the industry.

No response was offered from industry or government, and when the AFPA repeatedly contacted program makers offering a response they were ignored.

The AFPA made an official complaint, and the ABC’s Audience and Consumer Affairs department gave it the big tick.

It responded, saying it “concluded that the lack of rigour in the interview with Ms Schuringa (from the Goongera Environment Centre), combined with the fact that more was not done to ensure a timely response to her claims, was in breach of the ABC’s requirement for due impartiality”.

To be fair, the ABC’s Audience and Consumer Affairs department gets a lot of complaints – one ABC viewer complained that an interviewee was wearing a Red Bull cap which amounted to advertising which was upheld – but the AFPA’s win it still a big one.

And Victoria’s foresters also had a big win in the fight against animal activism and illegal farm trespass with secret surveillance undertaken by animal activists finally ruled out by the Victorian State Government.

The introduction of on the spot fines will go a long way to fix Victoria’s broken farm trespass laws.

This has been a long time coming. Nationally, trespass laws have for decades often been vague at best.

It’s not a solution; protestors will still protest.

But it is a start. Now it’s up to the Victorian Government to enforce those rules.

The Federal Government’s $688 million HomeBuilder grants scheme was perhaps a surprise. The HIA, AFPA, MBA et al pushed hard for this one.

It was quietly thought that with all the other CoVid-19-related demands on the public purse this one might fall between the cracks.

But, of course, it was too important for that to happen and the Federal Government is to be credited for recognising that.

They are all little wins, but they are wins.

There may indeed be light at the end of the tunnel, and it might not be the train we all expected.