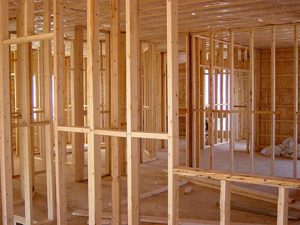 The timber industry in its various forms is justifiably nervous about the impact of the COVID-19 virus. The virus has been described as a wrecking ball for the house construction industry, with the impact hitting the timber manufacturing sector. Source: Bruce Mitchell

Manufacturers of house frames, roofs, cabinetry, doors, timber floors and decks will all be hit hard.

New housing starts are declining rapidly and predicted to plummet significantly in the next six months.

The Green Triangle Forest Industries Hub and the Australian Forest Products Association have urged government to implement a building stimulus recovery package to counter the massive reduction forecast for new house starts as a result of COVID-19.

The peak body predicts a 50% reduction in sawn timber demand across Australian sawmills in the next six months as demand for forward orders declines.

The HIA sees the appointment of a Building and Development Industry Taskforce is an important step for Victoria’s economy both during and after COVID-19.

They want the National Cabinet to consider the immediate implementation of a stimulus plan to drive the housing sector and secure regional employment through the construction supply chains.

It appears a fair call given the damaging ripple effects that a shut down in the building sector would have.

But it will be a hard call for the National Cabinet given the demands it is already facing.

Meanwhile, in some good news, New Zealand’s forest owners and contractors are preparing for the resumption of harvesting next week.

Forestry and wood processing is a major employer and export earner for New Zealand but was shut down very early in the piece as the government attempted to keep as many people as possible at home to contain the spread of covid-19.

The industry has not spent that time being idle.

A lot of good work had been completed in recent weeks developing safe working protocols to comply with the reduced lockdown requirements effective next Tuesday.

And Allied Natural Wood Exports has shown its confidence in the industry by lodging an application for a $14.5 million hi-tech timber optimisation hub with Bega Valley Shire Council.

The Border Fire, which razed homes and community infrastructure on the state’s Far South Coast, also destroyed millions of dollars’ worth of infrastructure and stock at the Twofold Bay facility. And in a brave move all of the facility’s employees at Eden were kept on and involved during the clean-up.