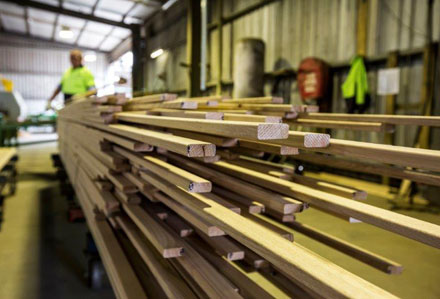 What a week it has been for the timber industry, capped off by the Climate Solutions Fund decision by the Federal Government. In a nutshell, the decision will simplify access to carbon funding for new forestry projects in five regional forestry hubs, including communities hard hit by last summer’s bushfires. Source: Bruce Mitchell

The initial locations are southwest Western Australia, the ‘Green Triangle’ of South Australia, north/northwest Tasmania, and the northeast and southwest slopes of NSW.

This will enable the forestry sector to participate in the Emissions Reduction Fund (ERF).

Previously, the scheme’s regulations required plantation projects to buy water entitlements to offset the loss of rainfall run-off trapped by the new trees.

As AFPA CEO Ross Hampton pointed out, while it has always been possible for farmers and landowners to gain carbon credits for planting trees for environmental uses, it will now also be possible to bid for credits for production trees which will be processed into renewable products, and the area replanted.

And it got major paper manufacturer Visy excited. The company described the decision as a “triple win” for the economy, the environment and the community.

And then came the Bunnings decision to stop selling timber logged by VicForests.

It’s worth pointing out that Bunnings and Officeworks – both owned by Wesfarmers – in 2018 announced they would only stock Forest Stewardship Council (FSC) certified products by 2020, ruling out timber and paper from the state-owned logging company VicForests.

And it’s also worth pointing out that Bunning said it only sold a small portion of VicForests’ total harvest.

But that hardly matters. It’s Bunnings’ reasons for the decision that is so irksome, so unfair.

The Federal Member for Gippsland Darren Chester said that it was extraordinary Bunnings would make this premature decision without any genuine consultation with its local suppliers and jeopardise the financial futures of dozens of timber workers and their families in Gippsland.

And it was pointed out by numerous people that the court decision is still subject to appeal in the courts system.

Bunnings claims that it has a zero-tolerance approach to illegally logged timber and that it only sources timber products from “legal and well-managed forest operations”.

That is perhaps a worthy sentiment.

But as State Shadow Assistant Minister for Forestry Gary Blackwood pointed out, Victoria does have world-leading harvesting and management practices.

He, among others, pointed out that by potentially moving to less regulated markets, Bunnings is telling consumers they would rather cheaper product that helps their bottom line than Victorian product that supports local jobs.

The CFMEU has launched an on-line petition to let Bunnings know how disappointing the decision is.

It can be found at https://saveourtimberjobs.cfmeu.org.au/

Which brings us to 4 July, and the by-election in the seat of Eden-Monaro.

It is possibly no coincidence that the last time an opposition lost a seat to a government at a by-election was during the 1920 global pandemic when Billy Hughes won Kalgoorlie from Labor.

The government back then was rewarded for its management of the crisis, and that might happen today.

Eden-Monaro is therefore probably there for the Liberals to win.

But if 2020 has taught us anything, nothing is certain.