Friday Analysis: During COVID-19 why are police not booking protesters? 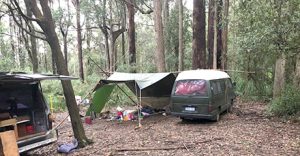 The laws, restrictions and even the recommendations introduced to combat the spread of Covid-19 are, to most intelligent people, pretty clear. Don’t leave home unless you need to. Very simply put you can go to work, you can seek medical help, you can shop, and you can exercise sensibly. Source: Bruce Mitchell

In Victoria, these recommendations are law. That means you can go to your normal place of work, you can go to your doctor or the chemist, you can shop for essentials (and that doesn’t include browsing for shoes or power tools at a mall across town or anywhere), and you can exercise.

What you can’t do is pack up your swag and go camping in the bush with the deliberate aim of disrupting honest business people from going about their daily operations.

That should be obvious, but apparently not.

Despite clear legal prohibitions, including Covid-19 restrictions, protestors in Victoria continue to interfere with legal forestry operations by entering worksites.

They have reportedly been active near Warburton, north-east of Melbourne, and there have been ongoing clashes in the Central Highlands area.

Police were called after campers set up between Powelltown and Gembrook south-east of Melbourne recently.

Logging contractor Brett Robbin, who has been a victim of the disruptions, said the group was recognised as known protesters.

If he knows who they are, why aren’t they being fined.

The protestors reportedly told police they were homeless. Police simply told them to move on, and obviously they haven’t.

Why are the police not booking them? It’s a simple question. At the start of April, when police in Victoria were first granted special powers, they were fining up to 142 people a day.

However, after heavy criticism, Deputy Commissioner Shane Patton asked officers to back off a bit and limit the fines for only the most deliberate breaches of restrictions.

In the past week, police have issued around 50 fines a day.

Thirteen people were fined in the past 24 hours.

But not the protestors who are clearly breaching the law.

It would be wrong to suggest that police have been told to go soft on the protestors. Very, very wrong.

But the logging contractors in Victoria whose livelihoods are being disrupted by these protestors deserve better and deserve an answer.

Unfortunately, the silence from the State Government will be louder than the silence of protestor-free bushland.

Meanwhile, the seemingly simple task of finding a candidate for the Eden-Monaro by-election has developed into mess for the Liberal Party.

What should have been a clean decision to put up the best man or women to challenge for a seat in a by-election, which many reports indicated the Government could defy history and win, has ended in tears.

In recent months, because of the turmoil of the Covid-19 pandemic, political point-scoring has seemingly been put to one side and the National Cabinet has seen unity across the board.

But not, it seems, in New South Wales where game of will-they-or-won’t-they by two of Premier Gladys Berejiklian’s most senior lieutenants in pursuit of federal fortunes has played out.

The Premier has instead demoted potential candidate Transport Minister Andrew Constance from the position of Leader of the House and has warned she is working on a wider reshuffle.

This is in response to Mr Constance’s decision to abandon his plans to run claiming he had been “white anted” by Deputy Premier John Barilaro who was also considered running.

It all ended up looking like a ham-fisted student politics race instead of what should have been a carefully co-ordinated attempt to wrest a seat from Labor.

Now, neither of them is running and few doubt that Labor will romp home.

The last Newspoll put the coalition and Labor nationally on 50-50.

Eden-Monaro might have shed its bellwether status in the past two elections, but it is still a 50-50 electorate.

Of course, it still leaves the people of Eden-Monaro no better off. The area has taken a double whammy economic hit.

Locals say tourism is stuffed, agriculture is stuffed, small businesses of all kinds are struggling, and only Woolworths is doing well after pestilence followed fire and drought.

And there are still at least 50 families living in caravans in the Cobargo area after having lost their homes in the bushfires.

They all deserve better.