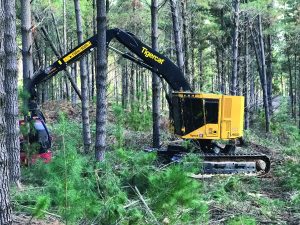 Logging contractors have been left out of government support packages for the timber industry, a forestry sustainability inquiry has heard.

While there had been a glut of work post fires as the industry sought to process as much timber as possible in the small window while those trees were still useful, there has been a subsequent sharp decline in work as that recovery process wound up. lt’s estimated contract quotas have reduced by 55 per cent in the South West Slopes region and the Australian Forest Contractors Association estimates some 50 workers will be laid off.

The Lonergans employed two crews at the time of the fires, and that has been reduced to nothing.

lt’s been a similar story at other contractors in the region.

With logging machinery at times costing in the millions of dollars and financed over some five to six years, businesses had been caught short.

She noted her operations has been forced to sell off machinery but still had significant debts of some $1.8 million, while it was also facing a bill of some $300,000 in redundancies.

“We have been looking for support from the Government and think that the Government should support us by either paying out our machines or help with redundancies, or ask the banks to give the contractors time to sell their machinery,” Ms Lonergan said.

“If not, the future for the contractors is that we go bankrupt.

“We need to find a way how we can keep contractors and staff employed locally.”

She noted contractors had played a large role in the fire-fighting effort and some had lost either homes or other structures such as sheds, while others had lost machinery.

“In my area where I live, we live out on the Elliott Way, there is 20 farms out there and 10 of them lost their houses,” she said.

“No one ever hears about them. But no one hears about us losing people’s equipment: We lost our shed, our office, no one hears that. “There has not been the support. The mills, the forestry companies, they have all received something but there has been no support”

Ms Lonergan said the contractors don’t expect jobs given when there’s no timber to harvest, but was asking for some support to give businesses time to adjust to the new reality.