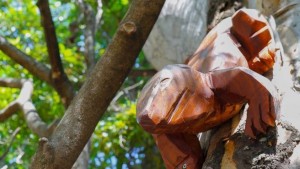 A Queensland artist is carving wooden wombats, koalas and goannas out of tree stumps and branches that fell during recent storms in Brisbane for a new art project. Sources: Yahoo News, ABC News

Artist Matthew George, who is known as Matty G, has created more than 30 animals throughout the Queensland University of Technology’s (QUT) Kelvin Grove campus.

The creative carver takes tree stumps and carves them into wooden animals, using only a chainsaw.

Mr George said the project aimed to get people to look up from their phones, connect with each other, and create sustainable artwork.

“One of the nicest things for me is when I am carving, they stop take photos and show interest,” he said.

“The aim of this project is for people to reconnect and enjoy something like this; it colours the university up a bit.”

Mr George said the project evolves as each animal is created.

“I take a look at the tree and see what can come of it,” he said. “I have visions which is natural and I make suggestions and then we decided then and there on what we will do.

“My favourite is the kangaroo, it is fun [and people] appreciate him.”

“I saw Matty creating something absolutely beautiful from a stump and thought it would be fantastic for the university,” she said.

“We had quite a few trees down due to storms so I contacted Matty and he came down and it started from there.

“The key thing about going to university is to learn but you need to have a beautiful environment too.”

Students are urged to spot the native animals that have been placed in trees, above car parks and alongside lunch tables.

Ms Hewitt said the animals have become a talking point for students, especially the international students.

“Students stop to find them,” she said. “We have had people take photos of the birds and then realise they are not real, it gives me a chuckle when I walk past them and hear them say that.”