Australia is under fire 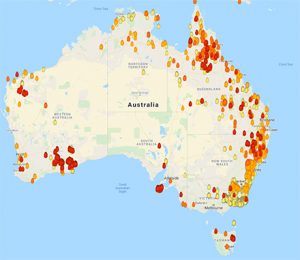 There are fears two massive bushfires burning on the NSW-Victorian border could join in coming days, creating one massive fire front. CFA state response controller Gavin Freeman said there was a “real potential” the fires burning along the state border could combine. The Corryong fire in Victoria’s north west has crossed the border into NSW and could be days from merging with the Snowy Mountains fire in NSW. Source: Timberbiz

Mr Freeman said while conditions had eased, warmer weather later in the week could spur on the fires. Scattered showers should continue to fall on fire grounds until midweek as attention turns to getting towns up and running.

In NSW, more than 13mm fell at Merimbula on Monday, 9.8mm at Bega and 2mm at Nowra and Lake Conjola. In Victoria, the rain that is giving bushfire-hit areas some much-needed relief will continue throughout Tuesday.

The Victorian Government declared a State of Disaster on 3 January 2020 with New South Wales declaring their first State of Emergency in early November with further declarations in December and now January.

Victorian Premier Daniel Andrews declared a State of Disaster for six Local Government Areas and the Alpine Resorts. Today there is a minor respite in Victoria after cooler conditions but later in the week the temperatures will rise again.

One of the casualties of the Victorian fires was Gippsland Maramingo Creek timber worker Fred Becker who was a third-generation timber worker. Mr Becker’s father Alex Becker established the Maramingo sawmill 90 years ago east of Genoa, it is one of the area’s last family owned sawmills.

“Gippsland is currently experiencing some of the worst bushfires we’ve seen and while we don’t yet know the full extent of the fires’ impact, we know it is significant,” the Member for Gippsland Darren Chester said. “Our communities are resilient and while there is a long road ahead, we will get through this together.”

Tim Johnston CEO Victorian Association of Forest Industries said that the VAFI’s immediate concerns were with the individuals, families, communities and local businesses across Victoria that have been devastated by these bushfires.

“The full impact of the bushfires is unknown at this stage, but the first step is to get the fires out,” he said.

“Many forest contractors and timber workers have been active in their communities, focussing on extinguishing the fires. This support will continue in the weeks and months ahead as they use their valuable skills, knowledge and equipment as part of the recovery and salvage process, including making areas and roads safe again for public access.

“It is too early to estimate the possible impacts of the fires across Victoria on the timber and forestry industry.

“The first step is for VicForests to make a thorough assessment on the full impact when it is safe to do so. When there is a better understanding of the impact, VAFI will work with its members and the wider industry to help those affected and work on the next steps for our industry as whole.”

A VicForests spokesperson told Daily Timber News that currently the focus of VicForests was on fully supporting the efforts to manage the bushfires across the east and north-east of the state.

“All available VicForests staff and contractors with fire-fighting experience and equipment are being deployed,” he said.

More than one million hectares have been burnt in Victoria, the majority in the East Gippsland region with losses in Reedy Flat, Buchan, Bruthen, Sarsfield Gelantipy, Nicholson and Swan Reach.

The Member for Eastern Victoria Melina Bath said she had huge praise for everyone working on the fire fronts. She that there were local foresters as well as staff from the Department of Environment, Land, Water and Planning and Vicforests whose expertise and managerial skills were helping fight the fires. They were locals who were using their expert knowledge of the terrain and habitat to save property and lives.

There are 136 fires continuing to burn across NSW with around 69 of those uncontained.

Fire crews across South Australia, Victoria, Tasmania and NSW are racing to build containment lines around dozens of blazes ahead of more hot weather predicted for later this week.

In New South Wales both the north and south coast native timber and softwood plantations have been hit hard, with the Pentarch chip mill at Eden burnt to the ground.

A spokesman for Allied Natural Woods Exports, the operator of the mill, Malcolm McComb called the mill’s destruction “tragic”.

It is the largest employer in the town of 3000. Seventy people are employed directly by the mill and 600 in the forestry industry in the greater region.

“It’s going to cause some disruption because we don’t know the extent of the damage yet – the logs about to be chipped are still on fire, so it’s not even safe to go in for an assessment,” Mr McComb said “There will be work to be done in cleaning up and salvaging operations, so we will need people to help there. We also hope to keep arrangements with contractors and stockpile wood, but it’s too early to say.’’

Mr McComb said there was so much rebuilding that needed to be done he did not know there was the engineering capacity to rebuild the mill quickly.

Timber NSW General Manager Maree McCaskill said that the last she had heard was that damage levels to Forestry Corp’s timber was at 44% on the north coast.

“But they haven’t been able to get in to make any form of assessment because the fires are still burning up there,” Ms McCaskill said. “In private native forestry they are saying a very similar amount has been lost.”

Ms McCaskill said it had been hard to assess what has happened in the south, but the size and scale of those fires had meant that the softwood resources at Tumut, Tumbarumba and Adelong have been taken out.

Known as the Greenhills area, the region is the prime softwood growing resource that feeds all the big softwood processing companies.

“And that fire is still burning,” Ms McCaskill said. “On the south coast from Bega to Bateman’s Bay has gone and that will have an impact supply of hardwood timber.

“There are two softwood resources on the southern highlands; Wingello has been burnt, and Penrose is under threat.”

How much timber was recoverable would not be known until crews could get into the fire zones.

Stacey Gardiner General Manager of the Australian Forest Contractors Association said that AFCA’s thoughts are with all communities and businesses that are, and continue to be, impacted by these devastating and tragic bush fires.

“We are aware that many of our members, and those who work within our industry, continue efforts to assist and support in the fire-fighting efforts. Their dedication and unwavering support along with the risks they face at these incredibly difficult times must be recognised and commended.  These sentiments extend to all those involved in the efforts and the incredible work they are doing,” Ms Gardiner said.

“Forestry Contracting Business have valuable skills and knowledge, along with access to key equipment, to support the fire-fighting efforts.  The support they provide will also continue in the months ahead as part of the recovery and salvage process including making areas and roads safe again for public access.

“It is too early to understand the full extent and impact on the timber industry and many other regional businesses and rural sectors.  Once assessments have been completed, AFCA will work with our members and industry to assist in any way possible. For now, our thoughts are with those who are impacted, suffered loss and those who are continuing firefighting efforts or providing support.”