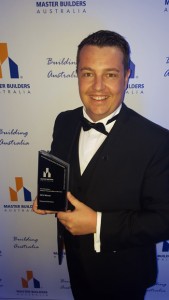 WA home builder, Ray Kershaw, 31, has taken out Australia’s top award as the WoodSolutions National Young Master Builder of the Year in the Master Builders Association’s annual awards held at Jupiters on the Gold Coast on November 14. Source: Timberbiz

Mr Kershaw, who is the director of Mondo Exclusive Homes in Doubleview is the fourth West Australian in four years to win the top award.

All entrants in the Best Young Builder category must be under 40 years old.

“As the founder and principal of Mondo Homes, Ray Kershaw has worked extremely hard to establish an enviable reputation built on his commitment to quality workmanship,” Mr McLean said.

“Ray’s participation in Master Builders Housing Council and on our housing awards judging panel reflects his commitment to the housing industry and his keenness to learn.

“WA’s remarkable success with this award for builders under 40 years of age highlights the talent pool of quality builders coming through the ranks which augurs well for the future of the housing industry in this state.”

“Innovations in timber construction, especially engineered wood products, are changing the way many designers and builders approach material specification for new projects and it’s the younger builders like Ray who will ride this new wave of working with timber.”

Mr Kershaw said he was delighted to be waving the flag for younger people in the building industry. He said some people had a perception that a builder needed to be older and more experienced to be able to do the job properly.

“By promoting young builders who have done extraordinary things it means the industry can promote apprenticeships, upskilling youngsters who are coming out of school to strive for something,” he said.

Mr Kershaw, who turns 32 in January was WA’s youngest builder, getting his builder’s licence when he was just 25.

“Getting a building licence isn’t for the faint hearted. I completed seven years of night school studies for the Diploma of Building on top of a carpentry apprenticeship. I then needed to gain over five years’ experience as a site supervisor, so it was not an easy feat.

“My application detailing all my experience was probably two inches thick and was put together with the help of Gavan Forster at the MBA. They don’t just hand out builder licences, so to get mine at the age of 25 was a huge thing for me and I owe a lot to all those who helped me.

“From there we’ve gone from just a one man team building a couple of homes a year to opening an office, employing staff and last year where we had 16 houses on the go and won lots of awards.

The November 14 MBA award was judged on the quality of work and on craftsmanship.

Judges considered awards Mr Kershaw had already won and assessed the skills he had displayed as a master craftsman, taken into consideration financial soundness of the company, growth rates and how Mondo had expanded.

“They took a cross-section of client testimonials about our workmanship from clients for whom we’d built houses and sought out industry references from engineers, architects, interior designers, sales people and all sorts of other people across the industry,” he said.

“We also had to have a pretty clean occupational health and safety record. Which is something I am really proud of and keen to keep in place.”

Mr Kershaw said while there were clients who valued the experience of an older builder there were also many who recognised that in a fast changing world there were benefits of using a builder who kept in touch with changing trends and was able to adapt them into existing building designs.

“We’re pretty tech savvy and operate in a modern way, keeping clients up to date with photographs from the site and keeping them updated through email correspondence.

“The way we operate appeals to a lot of our clients, who like that we are prepared to give new things a go. Because of our use of new technology it means we also work at a quicker pace,” he said.

Mr Kershaw said most of Mondo’s clients were not first home owners, they were generally between 30 and 60 years old and relied on their builder to be across developing trends like data, Wi-Fi, smart wiring, making sure that all the homes built are NBN compliant.

As a younger builder Mr Kershaw said it was natural for him to keep across construction methods and technology developments that older clients might not be aware of.

“And given the average trades person is now aged around 57 they are not so likely to be thinking about those kind of innovations. Clients are more likely to be focusing on furnishings and what colours the walls are going to be, how the living spaces are going to work and how the house will function.

“A lot of the time we’ll just sort out the technology in the background, creating an environment for the house to work properly.

“And if I was 60 I suspect I probably wouldn’t be across that as much as I am as somebody in my thirties. It’s just that I’ve grown up with computers so it’s natural for me to be up to date with what is changing.”