Wood made in a petrie dish 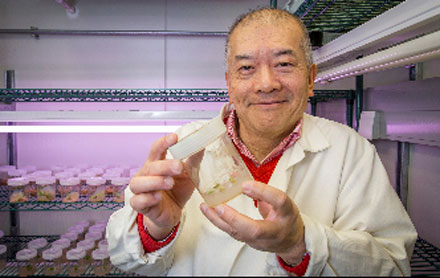 It may sound like magic but a Canterbury University researcher thinks 3D technology could hold the key to a whole new industry in 3D printing wood. Source: TVNZ

Associate Professor David Leung has just received funding of $255,000 to unlock just how to do it.

He says the idea is to take a group of cells he has in a petri dish and then make them become wood.

“We have the basic idea. So that’s why we now have to go through that idea, go though that step by step.”

That’s “the big secret” he says, but what he can tell us is it will start with growing wood cells in a lab before upscaling the process to produce the raw material for printing.

In normal 3D printing, the raw material is usually plastic, and it’s laid down in successive layers to build up a solid object. But recently, researchers have been able to 3D print cells into living tissue, and algae into tiny structures.

“That gave me a great inspiration that 3D printing can work with living, live plant cells,” Professor Leung said.

Professor Leung believes something similar might be possible with tree cells grown in a lab to produce, say, extra strong lengths of wood.

“I’m very excited by this.”

He has three years funding to turn that excitement into something more solid and give New Zealand an exciting new industry to take to the world.