What is the definition of stupidity? Bearly plausible guidelines 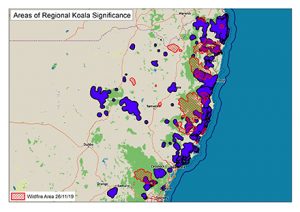 With the NSW Koala State Environment Planning Policy being released in the middle of the biggest wildfire crisis, one might expect that learnings from this fire season would be applied to the Koala Habitat Protection Guideline. By Peter Rutherford South East Timber Association

The State Environmental Planning Policy (Koala Habitat Protection) 2019 was released on 20 December last year, just before Christmas when nobody was looking, in a move worthy of Yes Prime Minister’s Sir Humphrey Appleby.

The subsequent Guideline was released from behind the iron curtain of secrecy, for fleeting public consultation, on Thursday.

Any GIS literate person within the Department of Planning Industry and Environment (DPIE), could have overlaid a copy of the season’s wildfire footprint, with the current Core Koala Habitat map in the DPIE mapping database.

This map suggests, that if forest fuel levels are not managed in prime koala habitat, as well as more broadly across the forest landscape, catastrophic wildfires will continue to decimate koala and all other fauna populations.

Page 13 confirms the experts who have developed the Guideline, lack a fundamental understanding of fire risk mitigation and wildfire behaviour. Under the heading: “List of suggested management measures to address key indirect impacts,” are the following fire risk management requirements.

“Development and implementation of a bushfire management plan with measures that specifically address risks to koala habitat.”

“Core koala habitat should not form part of the Asset Protection Zone (APZ). The

APZ should occur beyond any koala habitat.”

The failed policy of thinking that wildfire exclusion from Core Koala Habitat or any other koala habitat, is a deliverable environmental outcome in the medium to long-term, has not changed.

Why do activist bureaucrats continue to articulate the same failed fire exclusion policy position, while expecting a different result to the 2019-20 fire season?