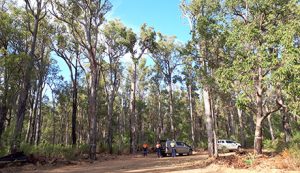 The WA forestry industry has slammed the State Government’s decision to halt a native timber logging operation and initiate a review of the project with just a few hours’ notice as “shambolic political interference”. Source: ABC

The ongoing standoff between conservationists and the timber industry reached boiling point last week when protestors interrupted operations in the Dalgarup forest near Bridgetown, 250 kilometres south of Perth.

Protestors argue the site is ‘old growth’ and unsuitable for logging but industry says the classification was set out in WA’s Forest Management Plan which was determined by the department.

Operations were halted at ministerial request, hours after protestors were moved on by police.

“We think it’s a pretty appalling development to have a harvesting operation effectively underway — a crew mobilised and then having a minister intervene,” he said.

“There was plenty of opportunity to seek a reassessment way ahead of this time.

“We’re trying to get people back to work safely with respect to the COVID-19 situation — how callous and thoughtless and cynical is this particular exercise by these forestry protestors.”

Jeff Pow, who farms 10 kilometres north of Dalgarup forest, participated in the protest, and is associated with the environmental activist group, WA Forest Alliance.

He said the Government’s current definition of ‘old-growth’ forest was inadequate, and did not take into account the complexity of the forest ecosystems.

“We need to be assessing this based on a new set of criteria and that needs to done in conjunction with the community,” he said.

On Wednesday, the WA Forest Alliance said it had submitted an emergency old-growth nomination, which was soon after rejected by the Department of Biodiversity, Conservation and Attractions (DBCA).

“At the moment the department has damaged its relationship with the community,” he said.

Bridgetown-Greenbushes shire president John Nicholas said the local council was working to ensure the interests of all parties were represented.

“We sit with a foot in each camp because quite clearly we’re trying to support the timber industry because it’s a very large part of the economy in this part of the world,” he said.

Mr Nicholas said the council was keen to see the industry supported, but there was a caveat.

“But on the other side we have a responsibility to our ratepayers to make sure we also create an environment that is preserved, and natural forest is one of those things we’re very keen to preserve,” he said.

“It’s a difficult issue for us quite frankly.”

“This is Dave Kelly abandoning ship on forestry,” he said. “We have a forest management plan in place. A lot of work goes into that, to ensure you have a safe forest and a future timber industry.

“If he [the minister] is going to throw that out every time he wants to win a few votes then we might as well throw that whole plan out the window.”