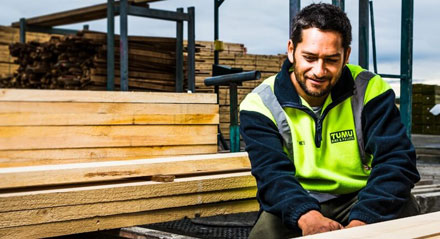 Tumu Timbers’ commitment to creating a healthy workplace has been recognised with the company named a finalist in this year’s New Zealand Workplace Health & Safety Awards.

The business was one of three finalists in the “Best initiative to promote better worker health” category of the awards, with winners to be announced at a gala dinner next Wednesday night in Auckland.

General manager James Truman said the team was excited to be shortlisted for the award, and that it followed significant investment in worker wellbeing, led by the company’s compliance co-ordinator Kylie Truman.

“Tumu Timbers has always had a strong focus on safety in the workplace having held the highest level of safety accreditation in the ACC workplace safety management practice programme since 2004,” Mr Truman said.

In 2015, a health and wellbeing committee was set up to recognise more focus was needed on the physical and mental health of the company’s more than 160 employees.

“With the assistance of specialist health professionals we have invested in a series of initiatives to establish a sustainable wellbeing program that can benefit our staff for years to come,” said Mr Truman.

The company also offered subsidised health insurance, and entry into work social sports teams and events such as Country2Coast and the Cape Challenge.

Wellbeing program such as the “Mates in Construction” suicide awareness, smoking cessation support and the Keep U Moving step fitness challenge were also introduced, he said.

Weekly Boxfit classes were run with support from the team at Giants Boxing Academy and a Tumu Whanau fun day had been established for staff and families, where fun activities were coupled with the opportunity to connect with local health organisation representatives.

This was not the first time Tumu Timbers had been finalists in these awards, Mr Truman said.

In 2010 the company was shortlisted in the “Best initiative to address a safety hazard” category for the development of a nail gun safety DVD aimed at reducing the risk of nail gun related injuries.