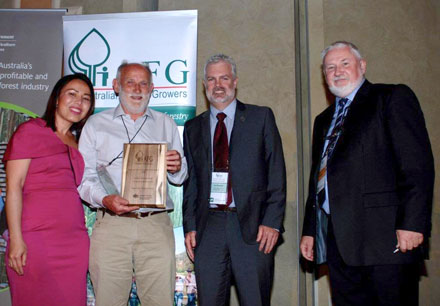 (L-R) 2016 winners of National Tree Farmers of the Year Outhay Poltock and Roger Poltock with Ian Ruscoe, Director of the RFA Review team in the Forestry Branch of the Department of Agriculture and Water Resources and Dr Kevin Harding, President Australian Forest Growers.

Roger and Outhay Poltock have been named as the 2016 National Tree Farmers of the Year at the Australian Forest Growers National Conference in Launceston. Source: Timberbiz

The award including a $5000 cash prize is sponsored by the Department of Agriculture and Water Resources and is widely contested.

“The independent panel which assessed entries this year was very impressed with the quality of applicants,” Dr Kevin Harding, President of Australian Forest Growers said. “In the end, the result was very close – but we are excited by the great work done on Roger and Outhay’s property and they are worthy winners.”

Mr Poltock runs a mixed farming enterprise of livestock/grazing and forestry at Wilmot in Tasmania. The property comprises 170ha of which 50ha is plantation/forest and 120ha for grazing about 200 beef cattle.

“The property is a wonderful example of how returns can be maximised by sustainably using different qualities of the land, in a single holding, for different purposes – in this case cattle grazing and forestry,” Dr Harding said.

The award was presented at the AFG Conference Dinner by Mt Ian Ruscoe, Director of the RFA Review team in the Forestry Branch of the Department of Agriculture and Water Resources in front of an audience of well over 200 delegates.

This included the most recent 2014 winners Connie and Marty Winch-Buist from Western Australia who participated in the independent panel to select this year’s winner.

The National Tree Farmer of the Year Award is awarded every two years and honours landowners or private forest managers who have established or maintained areas of forest on their property for the purposes of commerce, protection of water catchments and/or crops, or for reasons of preservation of biodiversity or a particular forest ecosystem.

The national competition is based on State nominations that are submitted and judged each year. States are then asked to nominate their selected candidate to compete in the biennial National Competition with the winner announced at the AFG conference.