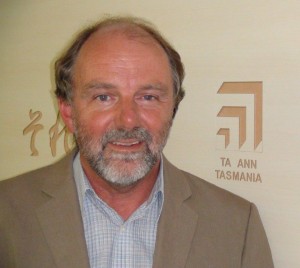 Ta Ann Tasmania says the private forest industry will be a vital source of timber as the company ramps up production at its new plywood plant in the north-west. Source: ABC Rural

Executive Director, Evan Rolley, said the plywood plant, which has an installed capacity of 36,000 cubic metres a year, will be sourcing timber from private growers.

“As we build the production capacity we’ll be looking to go to private growers, private landholders on the north-west coast, who have either hardwood or softwood timber available for sale,” he said.

“We’ll be seeking to make additional purchases from them to respond to the build in the market and demand for the product.”

The company’s major source of timber is native growth logs through its Forestry Tasmania contracts, which feed into its veneer plants in Smithton and the Huon Valley.

Mr Rolley said Ta Ann would be able to offer competitive prices when compared with other companies in the state sourcing timber for the pulp market.

“The big difference is that we’ve got a value-added product, there’s quite a difference, there’s a premium to be paid in relation to using wood in a plywood mill than compared to log that’s going for woodchip exports,” he said.

“Farmers who have got wood lots who have done some thinning and pruning in those woodlots, they are looking for the best possible return and we’ll be looking to speak to them about supplying our mill.”

But Ta Ann has suffered financially since 2012 when environmental groups targeted its Japanese customers during the now-defunct forest peace deal negotiations.

Funding for the new plant came from the Commonwealth as part of the now defunct forest peace deal.

When at full production the company claims the Smithton plywood plant will inject $40 million a year into the local economy.

Mr Rolley said the company is on its way to profitability and has regained about 15% to 20% of its major Japanese customers.

“Since we’ve stabilised the business, since we’ve put into place the agreement about our wood supply, we’re returning the company step by step to full profitability,” he said.

“This mill will add to that and give us diversity in our market, we’ll not only have our Japanese market which has been the underlying market for the longer term for the two veneer mills.

“But we’ll add to that an Australian market, so we’ll be diversifying not only our products but our markets.”

The Bob Brown Foundation said that environmental fight is far from over.

The conservation group claims taxpayer money is being used to log contentious forests that will feed a plywood mill in northwest Tasmania.

The Foundation’s Jenny Weber said that 400 hectares of high conservation value forests in the Tarkine region have been earmarked for Ta Ann to use in the next three years.