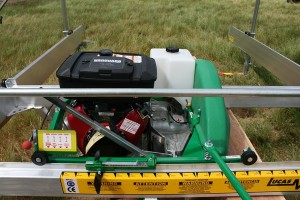 A Wooragee sawmill manufacturer has won $430,000 against a Chinese copycat and said he was trying to protect intellectual property in China that could cripple small entrepreneurs. Source: The Border Mail

Lucas Mill won a patent case in China against Chinese manufacturer SSML for making knock-offs of the company’s portable sawmill.

The sawmill allows logs to be cut into milled timber on the spot, saving the cost of transporting the whole felled tree to a the mill.

Although Lucas Mill won, owner Warren Lucas said he may not recoup the cost of the litigation and small businesses that tried to enforce intellectual property in China could face difficulties because of the high legal and business costs and language and cultural barriers.

“Although we had a finding in our favour, we might not get the dollars. But it’s about sending a strong message and I doubt they’ll do it again,” Mr Lucas said.

The decision comes as Australian local entrepreneurs are grappling with the challenge of entering into the Chinese market, where intellectual property rights often get trumped by quick copy jobs.

Family-run Lucas Mill has been manufacturing portable sawmills for 21 years. It has a solid turnover of more than over $14 million a year and has sold more than 15,000 machines to customers in 100 different countries.

But for smaller businesses, enforcing a patent in China could be risky, Mr Lucas said.

“Over the years we’ve spent a lot of money on patents and we were probably lucky in China. It could cripple your business trying to protect yourself. We were in a position to take that chance,” he said.

To win the case Mr Lucas had to overcome through a number of language and cultural barriers. But enforcing the IP was considerably easier once the company alerted the Chinese customs, who then seized the copycat product, which was produced as evidence before the judge.

“Once the Chinese judge saw the instruction manual it was the exact damning evidence,” he said.

Mr Lucas said although enforcing his business’ patent had been difficult, he would “most definitely” still pursue litigation if copycats popped up, especially when he was dealing with a high exchange rate and labour-cost disadvantage.