Royal Commission on bushfires – bring it on 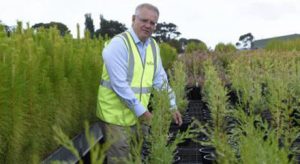 Plans by Prime Minister Scott Morrison to take a proposal to Cabinet to establish a royal commission into the current catastrophic bushfires have been generally welcomed by the timber industry. Source: Timberbiz

Climate change, and how to better prepare and adapt for the “new normal” of longer, hotter bushfire seasons, will be included in the review.

The review will also likely look at whether the Commonwealth should get new powers to declare a national state of emergency and how the Australian Defence Force could be deployed more rapidly.

However, it said it was too early to assess the detail of these impacts and it would be planning salvage harvest operations where it could as part of the recovery effort.

Stuart Ellis, chief executive of the Australasian Fire and Emergency Service Authorities Council, says there may be some value in a new inquiry, but not at the expense of action.

Mr Ellis, who chaired the national inquiry run by the Council of Australian Governments following the 2003 bushfires, said if an inquiry was to occur, it should focus on issues such as national coordination which emerged this summer but had not been addressed before.

Australian Forest Products Association CEO Ross Hampton has welcomed the proposal which he said would also look at responses of state and federal governments to the bushfires, the ADF involvement, as well as emissions reduction policies.

“Australia will always face the risk of bushfires because of our geography and weather patterns but clearly we need to look at ways to reduce the potential for these bushfires to burn so intensely and on such a large scale,” Mr Hampton said.

“We believe that it is necessary to look at the management of our forests on a whole-of-landscape scale and not rule anything out if it helps manage the bushfire risk.”

But he said the royal commission would be an enormous wasted opportunity if it didn’t also consider land use management across all our bushland.

“All our native forest management regimes must in the future be required to reach a higher state of bushfire readiness,’’ Mr Hampton said.

“Fires do not know about lines on maps, so it is ridiculous that some areas, like the estate managed for forestry and other values such as camping, are better prepared for fires than other areas.

“As a volunteer fire-fighter myself I understand the concern some are expressing that, even as these important announcements are being made, thousands of fire fighters are risking their lives on active fires or in ‘blacking out’ operations which are also very dangerous due to damaged trees and poles.

“There are many weeks of the fire season left to run and the absolute priority remains supporting the active firefighting efforts.’’

Mr Hampton said the Australian forest industry welcomed the announcement and looked forward to engaging with a royal commission in the future.

The Assistant Minister for Forestry Jonathon Duniam also welcomed the inquiry, saying: “This is what the people expect, and while it is not the time to speculate on time frames or the final form such an inquiry might take, I fully support the Prime Minister’s call for a national inquiry to ensure all viewpoints can be thoroughly and independently examined, to ensure we are as prepared as possible in the future.”

Gary Nairn, the former Liberal member for Eden-Monaro and chair of the federal parliamentary inquiry into the 2003 bushfires, said “it saddens me greatly to see how little we have learnt from past experiences”.

“The overwhelming evidence in 2003 was that poor land management produced massive fuel loads, and local knowledge and experience was either ignored or given far too little weight when it came to decision making about fuel reduction burns and to fighting fires, particularly in the early stages of a fire,” he told ABC radio.

Mr Ellis said a greater appetite for fuel reduction, including Indigenous burning, should be pursued.