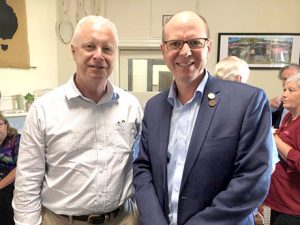 The Royal Commission into Natural Disaster Arrangements has been told of the devastating impact the Black Summer bushfires had on forest industries around Australia. In its submission to the Royal Commission the Australian Forest Products Association (AFPA) also highlighted the need for a whole-of-landscape approach to land management and hazard reduction. Source: Timberbiz

Appearing before the Royal Commission via video link, AFPA CEO Ross Hampton told the Commission that while bushfires were unavoidable, more fuel reduction, that included mechanical fuel reduction, to create buffers around towns and critical infrastructure, would make it easier to suppress catastrophic fires.

“The current system where there are multiple approaches to fuel reduction by multiple land managers and agencies isn’t working and we need a more coordinated approach,” Mr Hampton said.

“I commend the Federal Government for including in the terms of reference for the Royal Commission ‘the preparedness and resilience responsibilities, which includes land management and hazard reduction measures’, which has given the Commissioners the scope to closely examine this issue.”

Mr Hampton told the Commission that a Deloitte Access Economics analysis commissioned by AFPA found the economic benefits of mechanical removal of fuel, in conjunction with controlled burns, massively outweighed the costs and could dramatically reduce the severity of fires.

“The Black Summer bushfires have highlighted that we need to better manage Australia’s 132 million hectares of native forest regardless of land tenure. Research has found that in the eucalypt forests of south-eastern Australia, an annual reduction program of 5% of the landscape could reduce the extent of bushfires by as much as 50%.”

“Mechanical fuel reduction is a widely accepted bushfire mitigation tool in other fire-prone countries, but it is underutilised in Australia despite its proven efficacy.”

The Royal Commission also heard today from Forest Industries Federation of Western Australia (FIFWA) and VicForests. FIFWA representative Mr Barr told the Commission about the trial of Mechanical Fuel Reduction conducted near Collie in the state’s southwest region by the Department of Water working with the Parks and Wildlife Service, the fires services, and the industry.

Mr Barr told the commissioners “The need was identified to remove the fuels that allow a fire to transition from a surface fire into the canopy. To get an immediate benefit in fire behaviour, you need to use equipment which can cut small trees, and not leave any material behind. It wasn’t our intention, but we were also able to find a market for that forest material removed in the trial.”