Ross Hampton discusses the lock it and leave strategy 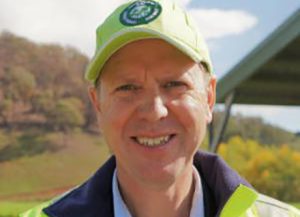 It has been a tragic fire season. Families and communities have been devastated, not to mention the loss of livestock, native animals and carbon emissions pumped into the atmosphere. Then there are the stories of small businesses going broke and children developing asthma from the months of choking smoke. By Ross Hampton chief executive officer of the Australian Forest Products Association.

It will be tragedy piled on tragedy however, if after all that, we don’t dismiss the argument that it is either reasonable or practical to deal with our highly flammable bush by just “locking up and leaving it”.

The scale of these fires and the prospect of a drying climate, which will ensure future summers are even more challenging, make it imperative that we take no options in combating bushfires off the table.

It comes as a surprise to many Australians to learn that we have 132 million hectares of native forest (according to the Australian Bureau of Agricultural Resource Economics) and only about 5% of that is designated for timber harvesting.

Over the past 25 years, the net area of forest harvested for timber production has halved, due to the expansion and addition of national parks and reserves.

Timber harvesting occurs at the rate of about six trees in 10,000 each year (and every tree harvested is effectively regrown through regeneration).

In fact, Australia’s approach to native forestry is held up as a poster child in many international forums I attend.

The fires burned through some 10 million hectares this summer, which puts the modest area harvested for timber each year — less than 100,000 hectares — in perspective.

But that brings us to the question of what is the best thing to do with the roadside timber that is so badly burnt it must be removed before it falls on cars, and the blackened trees in the areas that were previously earmarked for timber for our homes and offices?

Timber is a loved material sought out by homebuilders. Even if black on the outside the precious timber is still often good on the inside and able to be sawn and manufactured. In fact, after the 2009 Black Saturday bushfires in Victoria almost 400,000 cubic metres of burnt timber was recovered; timber that today graces many Victorian homes.

And of course, all that helped keep regional communities humming and economic activity alive after tourism was battered; just like it can today.

Removing the timber along roads for safety reasons should really be a no brainer.

Few would argue that adding to next summer’s fuel load by leaving it in piles anywhere near communities is wise.

Removing the blackened timber from forestry operation areas might seem a more problematic proposition. However, if done with care and followed by reseeding and regeneration, this is also a positive.

VicForests conducts controlled burns it says, “play an important part in the re-growing of native forests. It allows the bush to ‘reset’ more quickly to a vibrant, diverse, multi-species landscape.”

In its report on fire science the US Forest Service’s Pacific Southwest Research Station states:

“Post-fire salvage can help reduce excess fuels and decrease the risk of subsequent high-severity wildfires. Converting dead trees into long-lived forest products rather than allowing them to decompose in the field or burn in future wildfires may also provide carbon sequestration benefits. Post-fire salvage efforts also provide foresters the opportunity to go back into these areas and plant new trees to potentially restore forest conditions.”

As the arguments rage about how much burning off is possible or how much should be done at all, the forestry contractors are quietly and diligently going about their jobs ensuring at least part of our enormous forest estate has the maintained roads, thinned areas, fire breaks and managed patchwork of different aged forest to give the fire crews at least a chance when the flames come again.

ANU Professor Peter Kanowski was one of the three panel members of the COAG 2004 National Bushfire Mitigation Inquiry.

In response to the claims of some since the fires that more forests should be untouched and locked away he wrote:

“In the longer term, protecting wildlife and other forest values is more complicated than just creating national parks …

“We should explore a range of measures in different parts of our forests, reflecting the different ecosystems, values and risks.

“In some places, this will mean no intervention, as at present; in others, it might mean trialling forest thinning (as American forest managers have been doing), or quite different fire management practices informed and enabled by Aboriginal custodians of country.”

Post bushfire harvesting is an important part of that story.

The alternative of “lock it up and leave it” could lead to even more disastrous summers.

Ross Hampton is chief executive officer of the Australian Forest Products Association, vice-chair of the UN FAO Advisory Committee on Sustainable Forest Based Industries, a member of the International Council of Forest and Paper Associations (ICFPA) and is a ForestWorks board member.

This article first appeared on the ABC’s news website.