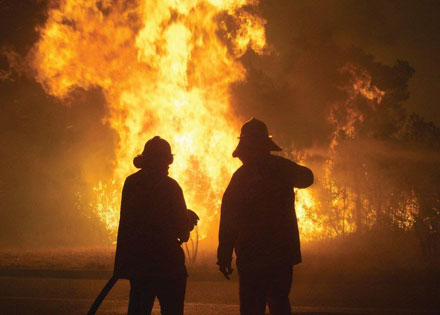 Fire experts in Portugal are citing the need for Australian-style warning systems after the most devastating blaze in decades left 62 people dead. Locals in the town of Pedrogao Grande are struggling to understand how so many people died as they tried to flee the inferno. Source: news.com.au

“Catastrophe, that is the only word for it,” said Fernando Antonio Serra Alves Bernardo, 59, who owns the Lido cafe in the town at the centre of the disaster. “This was like a war zone.”

Locals and experts alike talk of an unholy combination of extremely hot weather, an unusually dry year and ferocious winds that created a sort of hurricane of fire.

Many of those who died burnt in their cars as they fled.

“I believe in witches, I believe in anything now,” said one man who had briefly fled from his village over the weekend.

The deaths, the most in memory caused by forest fires in Portugal, have shown shortcomings in communication systems to evacuate people from villages.

“It’s still hard to identify what failed, but it’s a bit of everything,” said Xavier Viegas, an expert on forest fires in Portugal.

“Obviously, certain things that should have been done had not been done — especially in terms of communicating with the population, telling them about the danger levels, areas to be avoided.”

Other countries prone to forest fires have systems in place to warn people of danger.

Australia, for example, revised its warning system after fires killed 173 people in 2009, and now uses text messages and emergency broadcasts to warn people.

“There’s an urgent need to organise that kind of alerting,” Mr Viegas said. “Here, at best, someone from the parish council would go knocking on doors telling people to leave.”

Some locals blame the fires on the gradual replacement of pine and oak forests by highly combustible eucalyptus, which has been grown in this region by the paper and pulp industry.

Others say the fires flared up so quickly because landowners hadn’t obeyed the law and cleared their plots of undergrowth. The most intense fires broke out on Saturday, but huge blazes still raged on Monday.

The blazes may not die out until cooler weather arrives, possibly by the end of the week.

More than 1000 firemen are still working to put out the flames.