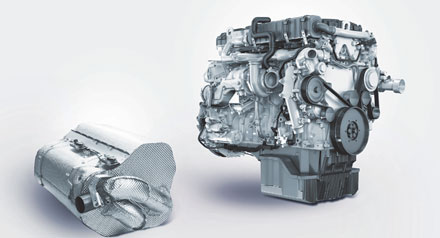 Ponsse’s new Mercedes-Benz/MTU Stage V emission engines feature the latest engine technology, and according to the company they are an excellent solution for forest machines that require productivity, reliability and fuel economy while being environmentally friendly. Source: Timberbiz

Ponsse focuses its production on products that use the cut-to-length method, a harvesting method that results in lower emissions and less soil damage than other methods.

The new Stage V emission engines increase the environmental friendliness of that method.

The new engines are modern, low-emission engines with particulate mass (PM) and nitrogen oxide (NOx) emission levels that are considerably lower than those of Stage III and Stage IV emission ratings.

In addition to control of the particulate mass (PM), Stage V emission engines also control the number of particles (PN) by means of a particulate filter (DPF).

All the engine versions have higher torque, and maximum power is achievable at lower revolutions per minute (RPM) than ever before.

The new engines have been extensively tested in different market areas. Both the forwarders and harvesters have been subjected to comprehensive testing in both cold and hot climates, and have been rigorously operated under actual working conditions.

The results of these field trials are encouraging, and have proven that the engines have very high levels of power and torque. And because high power is attainable with fast response even at low RPM, the machine productivity and fuel economy are markedly improved.

A major benefit of the new engines in terms of use is the exceptionally strong engine design. Stage V engines are largely based on the basic structure of the previous generation, the Stage IV engines. The most significant difference is in the new exhaust after-treatment system: in addition to the SCR after-treatment and EGR exhaust recirculation, there is now also a DPF particulate filter.

As with the previous generation, the after-treatment system is housed in a single catalytic converter unit, which in Ponsse forest machines is also heat insulated.

Stage V is a European Union emission standard that comes into force in 2019. Ponsse’s forest machines for EU markets will switch to the Stage V engines in the first quarter of 2019.