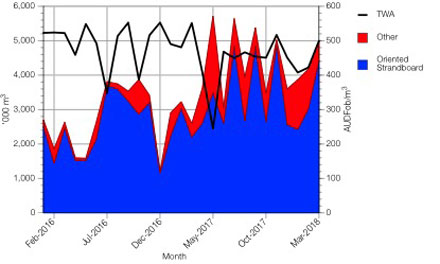 Australia’s reported imports of Oriented Strand Board (OSB) are lower than the reality despite rising more than 50% over the last year, according to a major builder. Source: IndustryEdge for Timberbiz

Imports of OSB totalled 52,486m3, up 53.8% for the year to the end of March, compared with the prior year. A major home-builder client of IndustryEdge told the forestry and wood products consulting firm that “OSB is replacing plywood in a lot of applications, especially for bracing. In reality, it’s a massive switch on our use.”

The import data, for the two OSB grades, is all over the place, as the chart shows, suggesting to IndustryEdge that imports can be recorded under either grade, without particular reason. However, the main ‘OSB’ grade saw imports up 34.8% to 41,108m3, while the other grade saw imports up a very large 213.2% to 11,379m3, albeit from a relatively low base.

The home-builder said it had approved increased use of OSB as it sought to control rising wood product costs, in its framing and other structural support applications.

“We were reviewing their wood product inputs for the last year and planning for the coming financial year,” Tim Woods from IndustryEdge told DTN.

“They talked about their framing supplier having approached them about using more OSB, mainly for cost reasons.”

The builder’s own data showed they used three times as much OSB as the year before, and if the import data is correct, used almost 20% of the national volume.

“There is no way this one builder used a fifth of all of the OSB consumed in Australia last year,” Mr Woods said. “Imports are way higher than the data suggests and are probably mixed in with particleboard imports. They are also up strongly.”

It should be noted that for the other grade, as imports have risen, prices have plunged.

In March 2018, the average price of the other grade was just AUDFob184.42/m3, exactly two-thirds lower than a year earlier.

“When we took a close look at the import data, it was clear they are not the only builder using more OSB, and it is obvious why. The price is right, and looks like it will be for some time. Importers and different building companies are aware of the price differentials,” Mr Woods said.

OSB is not currently manufactured in Australia.