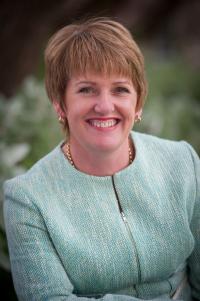 The new tele-operation technology allows remote use of a purpose-built tracked forest harvester from the safety of a separate cabin and seated console located at the work site.

Four cameras attached to the John Deere 909 felling machine transmit live images to monitors inside the cabin console where the seated operator can replicate their tasks.

The third stage of development in a quest to make our forestry work sites safer was unveiled near Nelson with a specially designed cabin console providing remote control operation of a John Deere 909 felling machine.

The control system follows on from a handheld remote system demonstrated last year.

Associate Minister of Primary Industries Jo Goodhew, visited the site of the tele-operation demonstration at Trass Valley, near Nelson.

Simon Rayward of Wood Contracting said a shift to mechanised operations was a logical next step to create a safe but productive industry.

“Although we are happy with our operators being in the machines 99% of the time, there are some more difficult blocks where we basically don’t want to put them in, or the machine for that matter,” he said.

Developers have emphasised the system is still in trial mode as further improvements are made to reduce vision obstacles like sun strike.

This breakthrough is part of steepland harvesting, a six-year, NZ$6 million primary growth partnership (PGP) program between the Ministry for Primary Industries and a consortium of forestry companies and contractors led by FFR.

Associate Minister for Primary Industries Jo Goodhew also visited the site and acknowledged the benefits of the project in eliminating forestry-related deaths, particularly after the “annus horribulus” of 2013 where 10 people lost their lives.

“That really focused everyone’s minds on the potential to get harmed at work, so any technology that can help is fantastic,” she said.

“This is really exciting but it’s also New Zealand leading the way in slope safety.

Chief executive of FFR Russell Dale said the development of the tele-operation control system brought the forestry industry closer to their ultimate goal of having “no person on the hill, no hands on the chainsaw”.

He hoped that as well as ensuring workers stayed safe on the job, young people looking to enter the workforce would see forestry as a more attractive employment option.