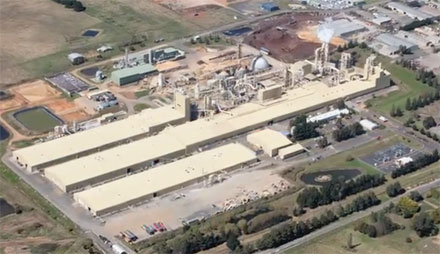 A $106 million expansion at a timber manufacturing plant on the New South Wales central tablelands has been approved by the State Government. Source: ABC News

Borg Manufacturing has been given the green light to expand its existing medium density fibreboard (MDF) facility complex in Oberon to include more buildings for housing new machinery.

The plant is the town’s main employer, and supplies MDF to Australian and export markets.

An assessment by the Department of Planning and Environment said the development would bring about $51 million to the local economy, creating 230 construction jobs and about 70 ongoing jobs.

In a statement Borg said it was pleased with the outcome after a “rigorous” two-year planning process with the department.

“Borg is committed to the industry, and its investment in the Oberon facility to date demonstrates its long-term vision to build an integrated world-class reconstituted wood-based panels plant that the whole community can be proud of,” a spokesperson said.

Oberon mayor Kathy Sajowitz said the facility had been long awaited, and welcomed the news.

“It most certainly will become a leading town in the state. This will be a leading edge facility which will be up with technology,” Cr Sajowitz said.

“Obviously increased employment for both Oberon and the surrounding areas, together with requirements for housing and these sort of increased labour,” Mr Charge said. “Not to mention the demand for housing in the construction phases.”

Earlier this month Borg briefed Oberon Council on its plans and told the council it intended to hire locally.

NSW Minister for Forestry and local MP Paul Toole said while the company would focus on employing locals, some positions would need to be filled from elsewhere.

“When we look at Oberon, it has a very low unemployment rate, so I think that’s really positive signs,” Mr Toole said.

“So to find additional employees they may have to go outside the region to ensure that they can find the appropriate numbers and appropriate people to be employed.” Mr Toole said the expansion would help put the town on the map.

“The timber industry is undoubtedly going to get bigger in the Oberon area, and for a town of just under 5,000, a $106 million investment in that area is quite substantial,” he said.

There were 10 submissions on the proposed development, with one objection raising concerns about air quality, noise and traffic.

The approval comes with a number of conditions, including air quality measures such as dust management, and noise reduction measures.