New wood: how it will change our skyline

Timber buildings are reaching towards the skies, thanks to breakthroughs in super-strong wood. Source: The Age

If there’s one way to get people talking, it’s to draw up plans for a new skyscraper and plonk it smack in the middle of an iconic skyline like London’s, overlooking majestic St Paul’s Cathedral. Londoners have nifty nicknames for the crop of eccentrically shaped skyscrapers that have popped up over the last decade or so – the Gherkin, the Cheese Grater and the Walkie-Talkie – but if a small group of British architects and engineers has their way, the historic skyline may be welcoming a bold geometric addition with a new moniker: the Toothpick. This sleek, 80-storey tower will soar 300 metres above the Barbican Centre, a gloomy, grey concrete slab of residential and arts buildings that was opened by the Queen in 1982.

But there’s something very different about this proposed tower, something pointing to the possible rebirth of the skyscraper itself: the Toothpick, as its name suggests, will be made almost entirely from wood. Thanks to significant breakthroughs in super-strong engineered timber products over the past decade, making them as tough as structural steel or concrete, the stage is now set for the construction – for the first time in human history – of tall timber buildings.

“Mass timber” is the collective term used to describe this new suite of structural materials, which include cross-laminated timber or “CLT” (multiple layers of wood glued together at right angles under extreme pressure to form giant wall, ceiling and floor panels) and “glulam” (layers of wood jointed together along the same grain for beams and posts). And here’s another nickname for these woody high-rises: plyscrapers.

Just as steel, glass and concrete revolutionised super-tall construction in the 20th century, it’s now likely that timber, which has been shown to be vastly kinder to the environment, faster to build with, with next-to-zero waste and far healthier to live with, will do the same as the new century marches on, leading to burgeoning new high-rise profiles in Europe, the US and parts of Asia. British architect Andrew Waugh, whose company Waugh Thistleton is building the largest timber housing development in the world in Hackney, London, goes as far as to call this “the beginning of the timber age”. At present, the tallest wooden building in the world is Treet (“the Tree”), a 14-storey apartment block in Bergen, Norway, which last year surpassed Australia’s first trailblazing timber high-rise, the 10-storey Forté apartment building in Melbourne, built in 2012. But the Treet will soon be dwarfed by the 24-storey HoHo tower in Vienna, due for completion late next year, an 18-storey building at the University of British Columbia, which will open next year, and a 34-storey tower in Stockholm, earmarked for completion in 2023. Earlier this year French architect Jean-Paul Viguier won a design competition for Hypérion, a wooden-framed residential tower in Bordeaux featuring hanging gardens, to be finished in 2020. In Sydney there’s International House, a striking timber office complex in Barangaroo, to open next year.

But if it’s a super-tall, iconic skyscraper you’re after, Michael Ramage, director of Cambridge University’s Centre for Natural Material Innovation and an internationally recognised expert in building big with wood, is your man. He insists that the timing is right for projects like the Toothpick, which he designed with engineers from London’s PLP Architecture. While the latest steel-and-concrete skyscrapers may look sleek and cutting-edge, most come with old-world energy bills, insists Ramage. “Timber has a very important place in the future construction of medium- and large-scale buildings,” says Ramage, in his soft American accent (he grew up in New York state), in a phone interview from his office at Cambridge University. “It can be cost-effective, faster to build, and result in more attractive high-rises.”

Timber is our only renewable construction material. Absorbing CO2 from the air, forests – from wilderness to crop plantations – are huge carbon stores or “sinks”, and a tree’s wood continues to store carbon when it becomes a timber beam holding up a ceiling, a process known as carbon sequestration. It’s been estimated that a timber beam of one cubic metre stores close to one tonne of CO2. Compare that to steel, concrete or plastics: not only do their manufacturing processes require large quantities of electricity and water, but instead of storing carbon, steel and concrete emit it. For the equivalent one cubic metre beam, concrete releases two tonnes of industrial emissions (steel releases even more). By the time a concrete skyscraper has been erected, it has produced tens of thousands of tonnes of CO2; it has been estimated that as a whole, the concrete industry has five times the carbon footprint of the world’s airline industry.

And here’s the scary part: more than 70 per cent of energy-related carbon dioxide emissions, says Scientific American, come from the planet’s vast new mega-cities. It’s estimated that China has poured more concrete in the past six years than the US has in its entire history. Yes, concrete and steel buildings have become far more energy-efficient in recent years, thanks to better insulation, solar panelling, vegetated roofs, waste-water recycling and low-watt lighting, but in the battle for green supremacy, nothing touches timber. Masses of large-scale buildings sourced from timber plantations would provide a carbon sink in any heavily developed city.

Right now, agroforestry may not form a major part of international climate-change policy, but that’s likely to change in the next decade or so, says Vancouver architect Michael Green, an internationally-recognised expert in building big with wood. While timber plantations are no substitute for continued deforestation – virgin rainforests have irreplaceable ecological value – it’s one way to reduce man-made greenhouse gases. 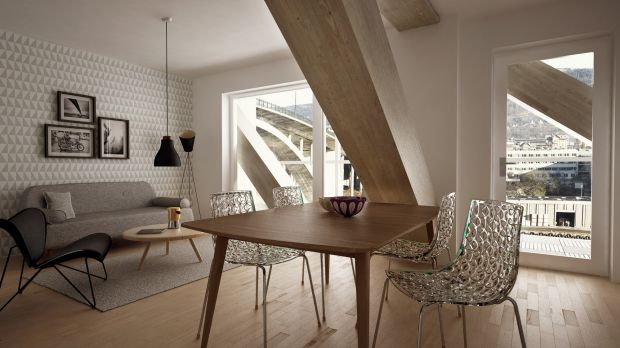 A view inside a Treet apartment, with timber beams prominent.

“European crop forests are expanding, while the use of trees is declining because we’re using less paper,” explains Michael Ramage. “We’re actually cutting down far less than we are growing, at a time when timber as a structural material is achieving a higher value. Timber plantations would also provide struggling farmers in industrialised countries with a new source of income.”

A greater use of timber in construction – together with more trees, parks, green roofs and vertical gardens – will also reduce the urban heat island effect: the phenomenon of higher temperatures experienced in cities due to concrete and tar soaking up thermal energy and radiating it back into the atmosphere.