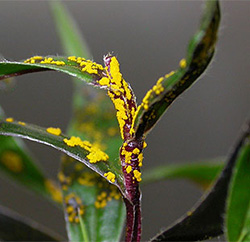 Forestry Tasmania is optimistic that the state’s cooler weather will diminish the impact of the exotic fungus myrtle rust. Source: ABC News

Biosecurity Tasmania has announced the discovery of myrtle rust in a garden hedge at Burnie in the North West of the state, with another four cases in the region confirmed recently.

Myrtle Rust attacks eucalypts, bottlebrush, tea tree and other plants from the myrtaceae family. It has damaged tree plantations and nature reserves in Victoria and New South Wales.

Principal scientist for ecosystems services with Forestry Tasmania Dr Tim Wardlaw said the discovery of any new disease is obviously of concern.

He said Forestry Tasmania has been working with the Department of Primary Industry on a state contingency plan to better understand the risks posed by the disease.

“I think the signs are that the damage, if it doesn’t become established here, is not as severe as we are seeing in the sub tropics and tropical areas of Australia where it is causing widespread damage in native forest,” he said.

“The conditions here are much less suited to it than they are in the more northern parts of Australia.

Dr Wardlaw said the likelihood of eradication depends on the outcome of the current investigation and the distribution of the outbreak.

Based on the impact of other plant diseases with similar impact, he’s predicting myrtle rust could result in less than five per cent yield loss over the life of a plantation.

“We’ve got a pretty good understanding that our plantations aren’t going to suffer major growth reductions as a result of it,” he said. “So we think we can live with the impact of these types of diseases quite easily”