Logsafe to track and monitor workers 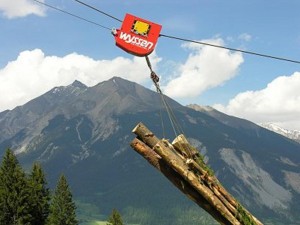 A safety management system designed to support forestry workers is not a “silver bullet” but it will help reduce dangers that loggers face in the industry. Source: Stuff.co.nz

Mike Alexander, director of Fast Harvesting Ltd, figured if dog collars could be used to track hunting dogs, then they could be applied to those on the ground in dense forests.

These workers, known as fallers and breaker-outs, often can’t see the person controlling the machine, which hauls two-tonne trees out from under their feet.

So in response to an industry that has recorded fatal workplace accidents, Mr Alexander developed Logsafe – a safety system that tracks and monitors those on the ground, and gives visual aides to hauler operators working up above.

“It was just trying to make the environment safer for the guys in the field. It’s not a silver bullet, but it is another pair of eyes out there,” Mr Alexander said.

Mr Alexander rolled out a prototype system on his Tokoroa operation in 2011 and said it had been refined since then.

Traditionally, communication systems in cable logging operations were made up of toots, alarms and radios. More often than not, the notoriously dangerous logging industry makes headlines when a serious accident or fatality occurs.

A particularly bad year was 2013, when 10 people lost their lives while working in the forestry sector.

Earlier this month, forestry company M&A Cross Ltd pleaded guilty to breaches of safety laws resulting in the death of Tokoroa man Charles Finlay in 2013. The death happened in the same Kinleith forest where Alexander’s men work each day.

Logsafe managing director Joseph Brolly said the industry had learnt a lot from 2013.

“What we’re trying to do is address the key danger areas in forestry – which are breaking out and falling,” he said.

“The industry has actually been demanding tools to help to provide more support to loggers on the ground.”

Faller monitoring goes beyond the traditional faller radio check-in system and allows for faster response times to injured fallers in emergency situations, Mr Brolly said. Along with emergency buttons that transmit GPS co-ordinates to a monitor, the Logsafe system has a “man down” alarm that beeps if the handset is on an angle of less than 45 degrees more than two minutes and activates emergency alerts if the faller doesn’t get up within 30 seconds.

“With Logsafe, the emergency alert would be raised two-and-a-half minutes after the faller was struck unconscious,” Mr Brolly said.

Foreman Pete Campbell has worked in the industry for more than four decades and said in the old days, men who were injured sometimes died in the forest because it was so hard to find them.

“This system is peace of mind for the guys up there [in the hauler]. There’s nothing worse in this game if something happens and you feel you may have helped contribute to it,” Mr Campbell said.

The report blamed a culture of complacency around workplace safety for the sector’s high fatality rate – 15 times the overall rate for all New Zealand sectors combined.

Forestry also has double the injury rate of other sectors in New Zealand, according to the report.

The system is compatible with any cable-logging system and is currently used on forestry sites in Northland, Dunedin and Gisborne as well as Tokoroa.