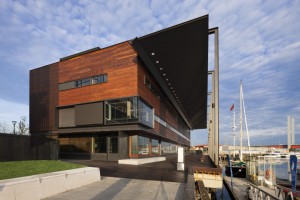 Clare Design Library at the Dock

The sheer number of entrants for the 2015 Intergrain Timber Vision Awards gives weight to the argument that there is a resurgence of timber use in Australian architecture. Source: Architecture & Design

With 124 entries across five categories in 2015 the Intergrain Timber Vision Awards demonstrates the growing importance of timber in Australian architecture across the spectrum of building types and material applications.

The Australian Timber Awards will be announced mid-september so we can look forward to the projects that come from that program as well.

The diversity of winning projects announced at the program’s award ceremony held on 20 August also demonstrates that architects and designers are innovating with the ancient material and that timber is becoming one of the most commonly used materials for sustainable buildings in Australia.

Take for example the “Best of the Best” winner, ‘Library at The Dock’, by Clare Design and Hayball architects.

The project is dressed head to toe in timber materials – from the promenade decking to the Tallowood and Ironbark cladding – but it is also one of Australia’s first buildings to be made from cross laminated timber (CLT).

Beyond the environmental benefits of CLT, Clare Design chose to use the material as it meant the building could be located as close as possible to the Melbourne Docklands waterfront – just eight metres from the edge. CLT’s weight meant it minimised remediation works on the existing wharf structure.

The Mornington Centre State 2 in Victoria by Billard Leece Partnership is another example of creative use of timber.

While some would say Billard Leece’s use of the material to bring warmth and depth to the interior space is hardly innovative, others would recognise that their use of timber on the building’s façade creates an exterior presence that could be considered unique to the healthcare architecture environment.

The building is almost entirely clad in white cypress timber with deeper battens that accentuate texture and provide differing patterns across the length of the façade, eluding more to a coastal shack than a care centre for dementia patients.

The hotly contested residential exterior category award was won by Jackson Clements Burrows for its Moonlight Cabin project. And while timber has never, and will never, leave the schedules of residential architecture, JCB’s use of the material for their tiny four-bedroom cliff top project was called “refreshing” by the judges. JCB used the material to provide a building that was adaptable to the sites ephemeral conditions.

The cabin is protected from the elements by a spotted gum rainscreen that envelopes the entire building, while operable walls (again spotted gum) and perforations to the cladding on the windows and doors means that occupants can also enjoy the better climatic conditions.