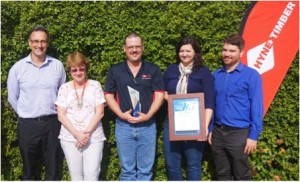 After being officially inducted into the Queensland Business Leaders Hall of Fame, Hyne Timber claimed its second win within a 48-hour period when it was announced the winner of the North Coast Queensland Training Awards – Large Employer of the Year Category. Source: Timberbiz

Hyne Timbers Organisational Development Manager Mark Lourigan said he understood the Maryborough based business won due to its requirement for all employees to undertake national qualifications.

“Not only did we win this award for our people undertaking a national qualification to ensure Hyne Timber remains competitive through cultural change, improving productivity and value adding, but because we can demonstrate how we are capitalising on the learning,” he said.

“A number of projects are currently being completed or undertaken right across the company that drive and shape our business in the direction we need to be heading.

“This is also the feedback we received from the Department of Education and Training in Queensland who says that our relentless efforts for everyone to learn and put the learning into practice are what makes us stand out from other finalists in the region.”

Mr Lourigan said this type of recognition was valuable for employees and clearly demonstrated Hyne Timber’s commitment to developing its staff.

“As the manager for organisational development, knowing the company you work for is truly committed to investing in employees, bringing everyone along on the same journey to achieve the same goals probably helps to explain why Hyne Timber is still here operating 133 years after it was established,” he said.

Hyne Timber has taken a holistic approach to nationally recognised training where all 500 plus staff are enrolled in either a Certificate III or IV in Competitive Systems and Practices including the CEO and senior leaders.

Last year, the company was a state finalist in Queensland and in New South Wales and now goes onto the Queensland State finals to be held in Brisbane on 11th September 2015.