Grow a building in an hour? Yes, we can! 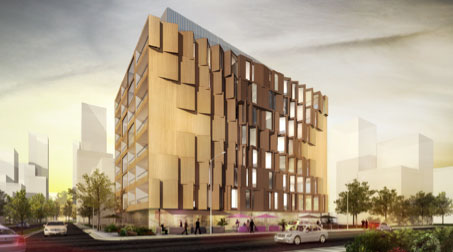 In just one hour, Australian softwood plantations can grow enough timber to create a nine-storey building’s worth of engineered timber, according to calculations by FWPA’s Mid-rise Advisory Program. Source: Timberiz

The Program estimates that more than one million hectares of Australian softwood plantations grow a combined total of between 30 and 40m3 of timber per minute. Once turned into engineered wood products, that equates to between 11 and 15m3 produced every 60 seconds.

For context, let’s take the nine-storey, 23-apartment block Forte, developed by Lendlease, as an example. The Melbourne-based tower was the world’s tallest CLT building upon completion in 2012. Using 970 m3 of timber in total, the Program’s calculations show the required material was grown in approximately just one hour.