Federal Labor tucks into the RFAs 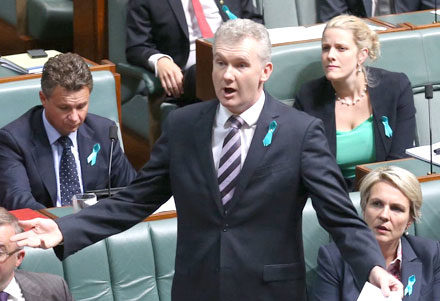 Federal Labor is promising to revisit and fix any logging agreements with state governments that are not based on “proper, independent and full scientific assessments”. Source: The Guardian

In a pledge that could have implications for the rollover of nine agreements due to expire in New South Wales, Victoria and Western Australia over the next three years, the shadow minister for agriculture, Joel Fitzgibbon, and shadow minister for environment and water, Tony Burke said in a joint statement:

“Labor will always support proper, independent and full scientific assessments of RFA [regional forestry agreement] outcomes as part of the agreed framework. This includes all relevant science, including climate science and impacts on threatened species.”

It comes after federal and state ministers had discussed legal concerns that extensions to logging agreements might be invalid when based on old scientific assessments.

NSW Labor has accused the state and federal governments of “unnecessary rush” in rolling over three RFAs in NSW based on “out-of-date science”.

The RFAs were negotiated by the commonwealth and states in the 1990s to better protect forest biodiversity and expand national parks and other protected areas, while at the same time providing “long-term stability” to forest industries by guaranteeing timber supply.

Documents reveal that the environmental and scientific reviews conducted 20 years ago for each RFA region will not be revisited, in part for cost reasons.

The Victorian Labor government is arguing with Canberra about the need for new scientific assessments of five Victorian RFAs which are due to expire in March 2020, after short-term rollovers were announced.

The assistant agriculture minister, Anne Ruston, has refused a Victorian request for $23m to fund new “studies, data collection and assessment activities” before the RFAs are extended on a long-term basis.

In recent email responses to constituents writing with concerns about the rollover of the RFAs, Mr Burke said:

“Labor has supported regional forest agreements [RFAs] as a way to manage forests. If RFAs are not delivering, this is something Labor will address in government.

“Labor will also look closely at the Turnbull government’s proposed national forestry plan. It is disappointing that, since taking office in 2013, the Coalition government still lacks a viable, definitive plan to truly deliver the important protections Australia’s native forests need”.

The NSW minister for lands and forestry, Paul Toole, said in a statement:

“A scientific assessment of all relevant matters is being undertaken jointly by the NSW and the commonwealth, and will take into account all new knowledge and contemporary issues that have emerged since the RFAs were originally established.

“NSW has already committed resources to this process. A robust assessment will be completed in time to inform development of new RFAs”.

The Victorian minister for energy environment and climate change, Lily D’Ambrosio, said: “We stand with federal Labor in supporting the need for the modernisation of regional forestry agreements.

“Our government is leading the way in ensuring RFAs are brought up-to-date to reflect modern forest science, climate change and the needs of local communities”.

The WA environment minister, Stephen Dawson, said in a statement:

“The matter of WA’s RFA is currently being considered by the WA government.”

In a statement, Joel Fitzgibbon and Tony Burke said:

“Labor takes evidence-based science seriously, as we do the benefits and jobs that a sustainable forestry industry brings.

“That is why Labor will always support proper, independent and full scientific assessments of RFA outcomes as part of the agreed framework. This includes all relevant science, including climate science and impacts on threatened species.”