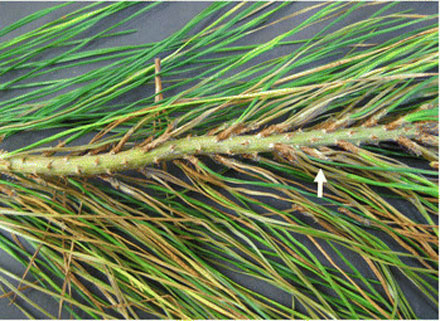 A Dunedin forest remains closed to the public after a pine tree disease not previously found on the South Island’s lower east coast reached the city. Source: Otago Daily Times

The disease attacked pine trees and could cause defoliation in some trees, which typically recovered the following season, but could also kill trees already weakened by other afflictions, he said.

The disease was detected during regular biosecurity surveillance, and close to 100 trees had since been cut down and disinfected to contain the outbreak, he said. However, it was likely Dunedin and Otago would have to get used to the disease now that it was here, Mr Dodson predicted.

Needle cast events had been recorded in New Zealand forest plantations since the 1950s, but red needle cast had emerged in the North Island only in 2008, information from Scion, a Crown Research Institute, said.

A Ministry for Primary Industries spokeswoman said notification was not necessary as red needle cast was considered ”an established species” in New Zealand.

It was spread through airborne water droplets in mist or fog, but was previously found only in the North Island and parts of the upper South Island’s west coast.

Mr Dodson said the find was reported to and discussed with MPI and the Forest Owners Association, but only to be noted as the spread of a disease already present elsewhere.

It was not yet known how it had been transported to Dunedin, but it could have arrived on a tramper’s boot, he suggested. He dismissed any concern the disease would have an impact on the company’s operation, saying it remained ”business as usual” for City Forests.

”Should it become established, expert advice has been that it is unlikely that it will become a major problem due to our rainfall and other climatic factors.

”It’s like all of these things – we can do without them … but our ability to stop it coming down here is almost nil.”