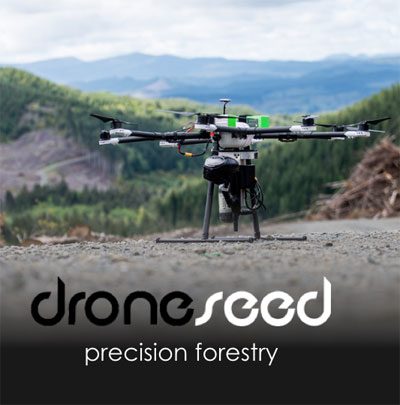 If Oregon startup DroneSeed has its way, foresters in the Pacific Northwest may be in for a surprise the next time they are out in the field. Instead of wandering into a team of people working to replant trees, they could be bombarded from above by a suite of seed-blasting drones deployed to accomplish the same task of reseeding an area after harvesting is complete. Source: Digital Trends

Founded a year ago by Grant Canary and Ryan Mykita, DroneSeed is developing a specialized drone system that is designed to both identify potential planting sites and then drop seeds in these selected remote forest locations.

When assessing a site, DroneSeed first uses drones to 3D map the area and identify micro-sites that will provide the best chance for tree survival and growth.

They then load up their drones with seeds and deploy them to these selected locations.

Rather than just dropping the seeds, the DroneSeed drones are equipped with a mini-cannon that fires the seeds using compressed air. Much like a paintball or BB gun, the seeds fly out of the drone at an astounding speed of 350 feet per second, which is even faster than your average paintball gun and matches most BB guns.

On a full battery, the drone can blanket an acre of forest with seeds in 1.5 hours.

The drone technology is so efficient that DroneSeed believes it can reduce replanting costs by at least 10-fold.

Working for a logging operation is a challenging and dangerous job — one of the most hazardous jobs in the world, in fact.

It also is physically demanding with laborers burning more than twice as many calories as a marathon runner.

Not surprisingly, logging companies have a hard time finding and keeping employees, even when they offer competitive pay.

These combined financial and safety benefits are why the DroneSeed drones are so attractive.

A suite of drones potentially costs less than a team of workers and can operate without the physical hazards humans face in the field.

DroneSeed believes its drones will transform logging much as precision agriculture did with farming.

“There is so much parallel with what happened to precision agriculture and what is happening with us in the forestry industry with drones,” said DroneSeed’s CEO Grant Canary to Marketwatch. “We see drones as forestry’s tractor.”