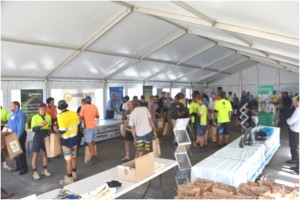 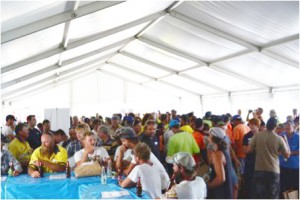 These announcements were made at approximately 100 BBQs held across Australia and sponsored by WoodSolutions and Wood. Naturally Better.

Now in its fifth year, National Carpenters Day is a celebration of the role of carpenters in building Australia, and their ongoing contribution to our environment though the use of wood.

“We’ve been involved every year,” said Nick Steens from Perth’s Independent Timber Supplies. “This year we had 230 chippies. The first 200 received a show bag full of branded items, an incentive to arrive early!”

Mr Steens went on to explain that they maximise the impact of their BBQ by involving many carpentry industry stakeholders. He said they also remind their carpenter contacts during the weeks preceding the BBQ.

During the week around 5000 people attended the celebratory BBQs held at hardware stores, building supplies and TAFEs across the nation.

Many of the hosts were Wood. Naturally Better Program Partners and organisations who share the goal of promoting the many advantages of wood and wood products.

“It’s a wonderful opportunity to recognise the contribution carpenters make to the lifestyle we all enjoy,” said Eileen Newbury, marketing and communications manger of Forest and Wood Products Australia, the industry services company that manages and resources Wood. Naturally Better.

“It’s also a chance to spread awareness of the environmental advantages of wood. Many people who work with wood every day are not aware of all the benefits.”