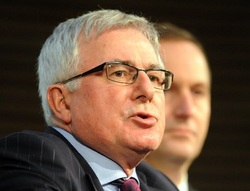 The sweetheart deal that halves carbon-emitting industries’ obligations under the emissions trading scheme may end as early mid-2016, based on a discussion document seeking public submissions on the government’s official review of the six year-old scheme. Source: Scoop.co.nz

The document, issued by Climate Change Issues Minister Tim Groser on the eve of his departure for the global climate change summit in Paris, confirms there is no appetite for including agricultural sector emissions in the scheme until realistic options exist and other countries are doing more to curb their own emissions.

But it says the rationale for offering a one-for-two deal that allows electricity generators using fossil fuels, the transport fuels sector, and the industrial processes and waste sectors to cover only half the cost of their carbon emissions under the ETS no longer exists.

The one-for-two scheme, meaning emitters only have to buy carbon offsets for one in every two tonnes of carbon emitted, was extended in 2011 as New Zealand continued to cope with the economic fallout of the global financial crisis.

There was now a “strong rationale for participants in the liquid fossil fuels, industrial processes, stationary energy, and waste sectors to take full responsibility for their emissions,” says the document.

It seeks submissions on the main priorities in the review by February 19 and further submissions on a range of other issues by April 30, when greater detail will have emerged about the obligations created by any global agreement struck in Paris.

“Moving to full surrender obligations would increase the incentive to reduce emissions and give businesses greater certainty when making investment decisions,” the document says.

Trade-exposed industries, including steel and aluminium manufacturing, would continue to receive ‘free allocation’ of NZUs to preserve their export competitiveness “until at least 2020”, but submissions are also sought on a path to reducing and ultimately removing that protection.

Of particular concern is the desire to encourage forestry plantation, which absorbs carbon and is an important part of New Zealand’s plans to meet future carbon reduction targets.

The document concedes the volatility in carbon prices under the ETS, which have ranged from close to NZ$20 per tonne of carbon in its early days and as low as 20 cents (NZ) in 2013 and 2014 when emitters were buying bargain basement carbon units from European schemes, damaged forestry planting intentions.

Disincentives to plant can also incentivise early forest felling, which adds to carbon emissions totals and defeats the aim of the policy.

The document lays out a balancing act the government must consider as it moves to adopt new carbon reduction targets between 2021 and 2030 because of the potential for large quantities of “banked” NZUs from the current decade to be applied to meeting carbon reduction obligations in the next decade and potentially undermining the desired action to reduce carbon emissions in the process.

That would double with the removal of the two-for-one deal for heavy emitters and reduce the overhang of NZUs.

The other factor in this equation is how quickly to allow New Zealand firms back into the international carbon credits market, from which New Zealand withdrew this year.

Too early a re-entry could also depress the price of NZUs, which climate change policy expert Suzi Kerr, from the policy think-tank Motu, last week said needed to be at least NZ$15 per tonne to encourage forestry planting.

However, New Zealand will be unable to meet its 2030 target unless it allows purchase of international units at some time in the future because New Zealand’s domestic carbon abatement options are “relatively costly” compared with other countries.