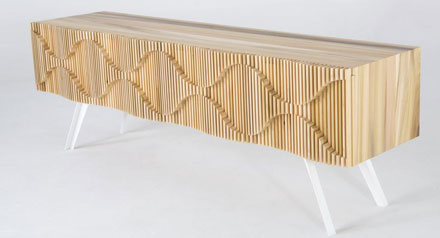 Eight of Australia’s most highly regarded designers have re-imagined their works in American tulipwood. The designs were launched at Denfair, one of Australia’s premier design showcases, in Melbourne from 14-16 June 2018. Source: Timberbiz

Tulipwood has been favoured in Europe for generations, but is little known in Australia.

Replaced is a study of how to use a sustainable material sustainably.

Encouraged to embrace the natural variation in the material provided, the designers have confronted the Australian preference for uniformity in timber.

As one of the most prolific hardwoods in the US forest resource, the designers and the Australian design community were exposed to the rate at which the timber used in the project is rapidly replaced through natural regeneration.