Are Greens spiking trees in Tasmania? A deadly serious concern for sawmillers 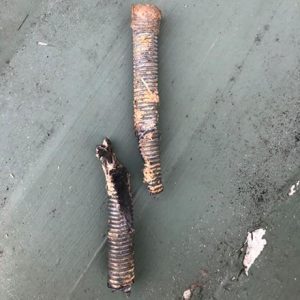 Tasmanian Police are investigating fresh allegations of “deadly” tree spiking in Tasmanian forests, as protests in logging areas starts up again. The spiked logs were supplied to at least two southern Tasmanian sawmills on Tuesday, destroying saws worth up to $15,000 and, according to the Forest Industries Association of Tasmania, threatening lives. Source: Timberbiz

The logs are believed to have come from the Wentworth coupe, a site of recent forest protests.

The two mills reported finding bolts in logs delivered to them by Sustainable Timber Tasmania from the Wentworth Hills area this week, and Tasmania Police and Workplace Standards are now both investigating.

The spiking has drawn strong criticism from those in the industry as well as both sides of politics in Tasmania.

However, Tasmanian Greens suggested the incident was an attempt to discredit those who stood against forest destruction and also suggested that the industry itself was to blame for the incident.

Wayne Booth from Karanja Timbers in the Derwent Valley said he received the logs on Tuesday and discovered the bolts.

“I put one of the logs through the mill, and on the first cut, I hit a spike,” Mr Booth said.

“When we investigated further, it was a deliberately-placed spike.

The other sawmill that received spiked logs was Mckay Timbers at Bridgewater.

Mr Booth said the incident could have been deadly.

“That person standing in front of that saw yesterday was my son — he might not have come home and that makes you sick to the core,” Mr Booth said.

“The saw can’t cut steel, so the saw either shatters, teeth fly off the saw, or the bolt spike itself will get thrown out.

“That travels at about 5000 feet a minute, and if someone’s standing in front of that it becomes a bullet.”

“This is a whole new low, the Government has to come out now, they have to stop it and the judiciary has to do something, no more smack on the wrists,” Mr Booth said.

The family business had since deployed metal detectors, finding a total of six bolts or spikes in four different logs, forcing it to send the entire 50 tonne log consignment back to supplier Sustainable Timber Tasmania.

Australian Forest Products Association Chief Executive Ross Hampton said the reports needed to be investigated and the perpetrators face the full force of the law.

“It is a blessing that at this stage no one has been maimed or killed but, if the environmental eco-warriors continue with this tactic, it is only a matter of time,” Mr Hampton said.

Mr Hampton said the incidents were the latest example of illegal and dangerous tactics used by activists against the timber industry. Protestors have also been routinely invading timber harvesting sites in Tasmania, Victoria and New South Wales, in breach of COVID-19 restrictions and trespassing laws.

Mr Hampton also took aim at commentators and some academics who are also campaigning for the end of native forestry in Australia.

“Activist academics who are loudly, and wrongly, arguing that native forestry in Australia is not sustainably managed, despite it being certified as world best practice, should consider if they are providing incentive to the more radical activists prepared to use guerrilla tactics which may potentially lead to death or serious injury,”  Mr Hampton said.

The Bob Brown Foundation and the Greens have both condemned any spiking and denied having any involvement with the Karanja timber reports.

Jenny Weber, from the Bob Brown Foundation, said a police inquiry needed to look into all possibilities.

“We completely deny any involvement or knowledge of this incident,” Ms Weber said.

However, Tasmanian Greens leader Cassy O’Conner said she was suspicious the incident was an attempt to blame those who stood against forest destruction.

“The last time tree spiking was alleged, in 2012, it was found to be the work of a disgruntled industry worker,” Ms O’Connor said.

“Every time tree spiking has come up in Tasmania, it has been from those opposing forest protesters.”

Shadow Minister for Resources Shane Broad said the incident was an “alarming reminder of the worst of Tasmania’s forest wars”.

“We cannot return to those days,” Mr Broad said.

“With police investigations at an early stage, it is disappointing to see the Greens leader pre-empting those inquiries and suggesting the industry itself is to blame for this incident.

“This is not the time to be making baseless accusations, and the police investigation must be allowed to run its course.”

In a statement, Tasmania’s Resources Minister Guy Barnett said peaceful, respectful protesting was a fundamental right for Tasmanians, “but trespassing and acting in a way that could result in injury is never acceptable”.

“This is why the Tasmanian Government’s Workplace Protection laws are needed more than ever to protect lawful businesses and to protect law-abiding workers, many in regional communities,” he said.