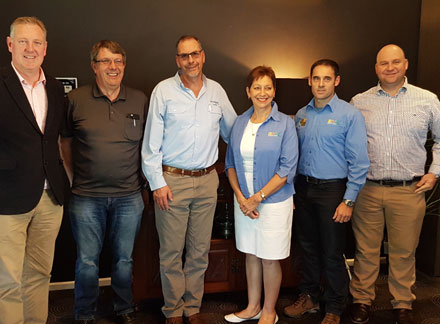 “Forestry is reported to directly employ 11% of our community in the South East, so if the State Government wants a regional development strategy they need to invest in the forest industry,” Mr Bell said. “Somebody once said that Forestry is about family, communities and generations, I couldn’t agree more”.

Mr Bell thanked AFCA for holding their AGM in Mount Gambier and said it is great to see so much positivity in the industry and the region.

“Forestry is a seminal industry for the South East and as such it was fantastic to see AFCA hold their AGM here,” Mr Pasin said. “As co-convener of the Parliamentary Friends of Forestry and a member of the Coalition Government, I look forward to continuing to continue to advocate for the development and growth of the forestry sector.

Ian Reid who has held the position of chair for AFCA stepped aside at the AGM after four years as chairman and eight as a director of AFCA. He navigated the association through the tough times of the GFC and a downturn in forestry and his tireless work secured its future.

“At our August board meeting we reviewed AFCA’s strategic plan for 2016-19,” he said. “This plan is the basis for building a stronger and viable association. I have enjoyed my roles within AFCA however, I am a believer that one should never stay in an organization in an official capacity for too long.”

Mr Adan Taylor of GMT Logging, Queensland was voted in as the new chair for AFCA at the AGM with new directors – Andrew Mahnken, Christian Stafford, Mick Johnston and Ricky Leeson. While Ken Padgett and Dennis Smith retired from the board after many years of dedicated service for which AFCA is very grateful.

“Firstly let me say what an honour it is to be elected Chairman of AFCA,” said Mr Taylor. “I would like to add my thanks to Ian Reid for his leadership over the past four years. Over this time, we have seen much change, culminating in the very successful AUSTimber 2016.

“It is true to say that thanks to Ian’s leadership, AFCA now stands as a stronger national voice for forest contractors. The future holds much opportunity for our industry, but also presents many challenges. Although our industry is well used to dealing with challenges, AFCA can and will be there to provide support any way it can.

“I have personally seen that through our General Manager, Stacey Gardiner’s efforts, we have been invited to sit in on discussions with other industry groups that only 12 months ago we would not have been approached.”

Mr Taylor said that he and his board would focus on growing membership by implementing the new strategic plan and urging current members to speak to others and encourage them to join this professional organization.

“By growing our membership, we can not only offer more value for members, but carry a louder voice into these important discussions,” said Mr Taylor.

Appointments to the AFCA board are effective 14 October 2016