Canadian softwood prices to rise on back of US housing 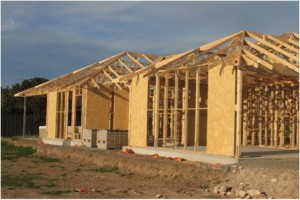 Canadian softwood lumber prices have fallen substantially in the past nine months, but that long, steady decline should end soon, according to industry analyst Hakan Ekstrom. Source: Vancouver Sun

The president of Seattle-based Wood Resources International said early signs of a resurgent US housing market should boost the demand for Canadian wood.

“We probably reached the bottom on prices two weeks ago and can expect them to start moving up now,” he said.

“That’s a clear sign that we should see more US house construction soon,” he said. “People have been a little bit too careful about spending money for a new home, but that looks like it’s about to change.”

Industry publication Random Lengths said its weekly framing lumber composite price rose $US10 last week to $US332 for 1000 board feet, compared with $US371 a year ago.

Mr Ekstrom said the low Canadian dollar helps Canadian lumber exporters, but noted that producers must pay export duties ranging from five to 15% when lumber prices fall below $US355.

His Wood Resource Quarterly report notes Canadian lumber exports rose 14% during the first quarter this year — including a 21% increase to Japan, a 13% increase to the US, and a 10% spike in exports to China.

“If you’re a sawmill in BC, I think you could be optimistic when you look ahead this year,” Mr Ekstrom said.

“Prices in the US are likely to go up, and China and Japan might be a little more interested in Canadian lumber, depending on exchange rates and freight costs.”

“We had somewhat stagnant demand in the United States, and growth in China has not been as robust as it was in the past,” he said.